Tobacco 21 – a Casualty of This Legislative Session 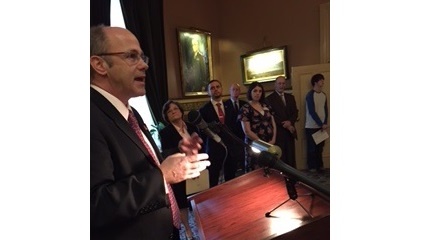 One of the casualties of the Vermont legislative session was legislation that would have increased the sale age of tobacco to 21.

The legislation stalled in March when it was ordered to lie after several previously supportive senators started changing their votes. This meant the bill was in a kind of limbo until senators chose to take action. The American Heart Association and our partners in the Coalition for a Tobacco Free Vermont worked hard to try to get naysayers in the Senate to change their votes to no avail.

On April 25th, our legislative champions pushed for a vote and the measure failed 13-16. A bright light, however, was that Senator White who had been a longtime opponent, did change her vote, noting in her speech on the floor that a number of her family members were suffering cancer, heart disease and COPD as a result of their smoking.

Our coalition will continue to push for this legislation next session but likely as part of a broader public health bill in the House. Please continue to stress the importance of this issue with your lawmakers.

See more details about the vote in our coalition’s press release below:

MONTPELIER---Public health advocates today voiced their deep disappointment in Vermont Senators for putting the interests of the tobacco industry ahead of the interests of Vermont’s kids. By a vote of 16-13 the Senate opted not to move forward on S.88---a bill that would have raised the sale age of tobacco products from 18 to 21.

“The tobacco industry won today, not kids,” said Tina Zuk Government Relations Director with the American Heart Association in Vermont. “Ten thousand kids alive today will die prematurely of tobacco. The Senate had the opportunity today to save many of them but said ‘no, thank you.’”

The bill previously had unanimous support from members of the Senate Health and Welfare committee – who reviewed testimony on scientific research – but fell short in the full Senate.

"We are very disappointed at the missed opportunity to prevent cancer and chronic disease in future generations of Vermonters,” said Jill Sudhoff Guerin, Government Relations Director with the American Cancer Society Cancer Action Network, “Lawmakers could have voted yes to save thousands of lives and millions of dollars in tobacco-related health care costs. Instead they voted to keep the tobacco industry generating revenue from the tobacco sales to our youth and to allow more young people to develop a deadly addiction."

Tobacco use is responsible for $348 million in healthcare and Medicaid costs annually in the Vermont. And every year 1,000 Vermonters die from smoking.

“Sadly, the Senate voted against an opportunity today to reduce long-term tobacco-related health costs and save kids from a lifetime of addiction,” said Rebecca Ryan, Sr. Director for Health Education and Public Policy at the American Lung Association. “Most smokers start before they turn 21. This bill would have protected Vermont kids who are targeted by the tobacco industry to be future life-long customers.”

“By voting against raising the tobacco age to 21, the Senate voted to keep cigarettes and other tobacco products in high schools where younger kids will continue to have access to them,” said Kevin O’Flaherty, Director of Advocacy, Northeast Region, with the Campaign for Tobacco-Free Kids. “The goal here was to give Vermont kids a shot at healthier lives by reducing their access to tobacco products.”