This week, You’re the Cure volunteers across Texas joined forces to plan for the upcoming Texas legislative session and learn about childhood obesity and grocery access.

The Austin Grassroots Action Team (GAT) is the action-oriented volunteer group that works in support of American Heart Association (AHA) policy issues in the Austin area. On Tuesday, December 16, this group met downtown to celebrate the holidays and get ready to kick off the New Year with a bang! Pkaye Washington, Chair of the Austin GAT, opened the meeting. Guest speaker Joy Casnovsky, of the Sustainable Food Center in Austin, explained the issue of food access specific to Texas and spoke about the origins and current projects of the Sustainable Food Center. Joy illuminated how the efforts of the Voices for Healthy Kids Texas Campaign could impact grocery access at the state level, prompting great questions and a vibrant exchange of ideas between the volunteers. 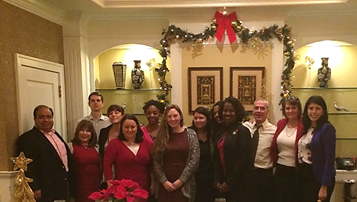 Vanessa reviewed the AHA’s Texas public policy agenda for the next legislative session. Savonne gave an overview on obesity in Texas and the Voices for Healthy Kids policy areas aimed at reversing childhood obesity, and outlined the Voices for Healthy Kids Texas Campaign focus on improving grocery access for Texans and the potential impact it could have on public health. The group was very excited about the campaign’s focus and discussed possible stakeholders and collaborations, ideas for promoting the campaign, possible allies, and potential ways that the GAT could help. The meeting wrapped up with an AHA grassroots update, focusing on action alerts and upcoming Advocating For Heart Days during the next legislative session.

On Tuesday, December 16, the American Heart Association (AHA) SouthWest Affiliate Advocacy Team held a Meet & Greet for volunteers in downtown Fort Worth at the Renaissance Worthington Hotel. Most volunteers were attending their first You’re the Cure event ever! After the volunteers and staff were able to meet each other over light refreshments, Kelsey Bernstein, Local Policy Manager, introduced the Smoke-Free Workplaces campaign in Fort Worth and shared how the volunteers might become involved in that campaign. Then, Victoria Nelson, Grassroots Director for the Voices for Healthy Kids Texas Campaign, addressed the need for improved access to grocery stores in order to decrease childhood obesity in Texas. Volunteers, who had a variety of backgrounds but were all passionate about a smoke-free city and healthier food for children, were very receptive and were prompted to take further action.

Connie Kerr, a longtime volunteer from Arlington and a member of the State Advocacy Committee, shared how she is involved with the AHA, and her “why.” Since her family has been affected by heart disease, she wants to break that cycle through her efforts in advocacy to help everyone lead healthier lives. The volunteers present were inspired by Connie to take action with You’re the Cure in person, in addition to their online efforts.

On Wednesday, December 17, the American Heart Association (AHA) SouthWest Affiliate Advocacy Team held a Meet & Greet for volunteers in at the AHA Dallas Market office in Irving. The night started with mingling and conversations between volunteers who became fast friends over dinner. Attendees shared their “why” by posting sticky notes on the wall for all to see.

After dinner, Victoria Nelson, Grassroots Director for the Voices for Healthy Kids Texas Campaign, re-introduced You’re the Cure and then introduced guest speaker Tania Boughton. Tania is a member of the new Texas State Leadership Council for Obesity Prevention, and a full-time mom of two who is motivated to fight childhood obesity by making it fun for kids to eat healthy. She shared her personal journey, which led her to write a cookbook called Eating Light, Done Right and team up with the Dallas Independent School District to establish a program called “Check the Light Before You Bite!” to reward kids when they choose healthy food options at school. Tania emphasized that her journey to improve children’s health would not be complete without being involved in advocacy through You’re the Cure, to engage her lawmakers and change policy for the better. She, and the other volunteers present that night, were particularly motivated to increase access to healthy food in underserved areas in Texas. 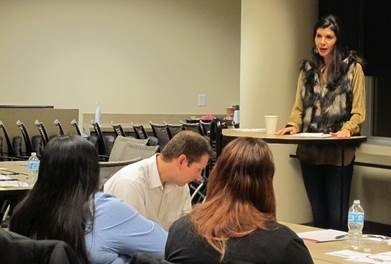 Tania reflected back on earlier the same day, when she was delivering holiday gifts to a school in Dallas and noticed the elementary school students sitting in the halls, waiting to go home. Each student was holding an apple or pear, given to them by the cafeteria staff because otherwise the fruit would have spoiled overnight. Tania was struck by the fact that these apples and pears may be the only fruit, or dinner, that the children would have at home that night. The Voices for Healthy Kids Texas Campaign will work to change this, so all Texas families can access grocery stores, and Tania emphasized how important it is that the volunteers become involved in this effort.

After introductions of guests and staff, a short video by AHA entitled “Life is Why” was played. Afterwards, each attendee filled out their “Life is Why” card. 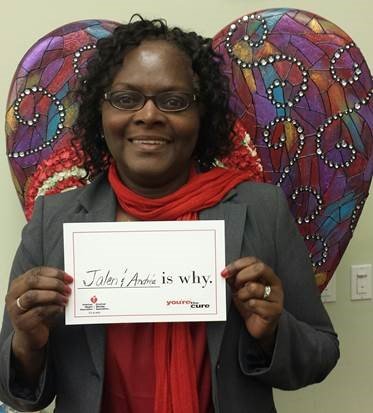 Joel then reviewed the AHA’s Texas public policy agenda for the next legislative session, and provided an overview of the Voices for Healthy Kids Campaign and its impact for the Houston and Texas communities. Once Joel completed the overview of the campaign, TaShon had the opportunity to further discuss the Voices for Healthy Kids emphasis on priority populations, including his work on the campaign to bridge the African American and Hispanic communities and their lawmakers together in order to pass a statewide grocery access initiative. TaShon also gave an overview of the upcoming Advocating for Heart days, highlighting the March 18th date for Youth Markets. The group was very excited about the campaign’s focus and discussed possible stakeholders and collaborations, ideas for promoting the campaign, possible allies, and potential ways that the GAT could help. Bill wrapped up the meeting by asking everyone to fill out apple-shaped petitions advocating for healthy food access.