The American Heart Association, along with our Smoke-Free Texas partners, have had a tremendous summer; adding Waco, Sherman, and DeSoto to the growing list of Texas Smoke-Free cities. Thanks to the hard work of our dedicated volunteers & coalition partners, the nearly 220,000 Texans living and working in these three great Texas cities are now protected from dangerous exposure to secondhand smoke that we all know is a major contributor to heart disease & stroke.

While Labor Day is now behind us and summer officially over, our work to protect the health of all Texas workers from toxic secondhand smoke exposure continues.  But first, let’s take a moment to celebrate our shared successes that made this summer the Summer of Smoke-Free.

On July 21st, 2015, after over an hour of public testimony the Waco City Council passed a comprehensive smoke-free ordinance with a vote of 5-1.  There was a great turnout of volunteers that showed up in their Baylor colored Green & Gold 100% Smoke-Free Waco t-shirts. Throughout the campaign we had multiple coalition members testify in front of the council.  Some of the most compelling testimony came from a local bartender Adam Barner, Baylor student Lynette Lartey, and Waco NAACP President Dr. Peaches Henry.  Prior to the vote the Waco Tribune published a captivating opinion editorial by Chief Medical Officer, Dr. Jim Morrison (Baylor Scott and White) and Senior Vice President of Medical Affairs Marc Barrett (Providence Health Care).  All together there were 5 supportive news articles that ran after the ordinance passage and Lynette Lartey was interviewed by 2 major news stations in Waco.

We’d like to extend a very big thank you to Peggy Lane, a longtime volunteer, without whom this ordinance would not have been possible.  Mrs. Lane spent countless hours advocating for a smoke-free Waco through testifying at City Council, meeting with policymakers, submitting letters to the editor and training other volunteers.

We’re very excited to go back to Waco in early January to celebrate the date of their implementation of the smoke-free ordinance!

On July 20th, 2015, the Sherman City Council passed a new smoking ordinance by a vote of 5-2. It prohibits smoking in all bars and restaurants within the city limits.  Our biggest surprise from the Sherman campaign actually came after the law was passed.  Local news Channel 12 interviewed the owner of Rendezvous on Texoma Parkway in Sherman, Jake Knight, and he said “this could be a positive for business, and bring in new clientele that might have avoided coming here because of the smoking.”  He went on to say that while he wished the whole county would have been able to do it together “if the City of Sherman feels it's the right move for our city, then I'm going to support it.”

On September 1, 2015, the City of DeSoto repealed their 1989 smoking ordinance and replaced it with a fully comprehensive smoke free ordinance that covers all indoor workplaces including bars and restaurants.  The ordinance is one of the strongest in the entire state of Texas.  Jimmy Stevens, the Health Inspector for the City of DeSoto, was the champion of this effort, and our team of Caitlin Brown, AHA Local Policy Manager, Kay Kamm of ACS, and Barry Thompson, a DeSoto native who was instrumental from the very beginning, did a great job supporting him.  At the City Council meeting, 7 coalition members provide testimony in support of the ordinance and nobody testified in opposition.  In addition, Mayor Pro Tem Curtistene McCowan added a cherry on top when she mentioned that she had never received as many emails and calls in support of an issue as she did for this ordinance.

Once again, thank you to our wonderful You're the Cure advocates, our committed staff, and community leaders who helped make Waco, Sherman, and DeSoto healthier places to live and work! 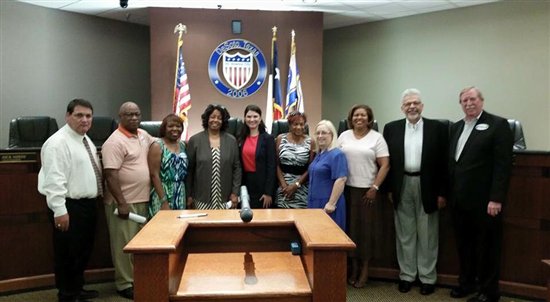