We recently had the pleasure of meeting an amazing new advocate!  Steve Goulet is a cardiac arrest survivor - and now he's on a personal mission to save lives with CPR.  Check out his incredible story in The Providence Journal:

A story of revival: Woonsocket EMT's cardiac arrest becomes mission to save lives with CPR

After a long day of work at his garage in 2006, Steven Goulet sat down at the bar with his buddy and ordered a cold beer.

He didn't have so much as a sip.

The moment the drink arrived, his eyes rolled back and he slumped over, his head hitting the bar.

Goulet doesn’t remember any of what happened next — not the nurse who rushed to his side, not the frantic chest compressions she and others performed, not the 22 minutes that passed before his pulse could be restored. At 27, he was in full cardiac arrest.

Even if Goulet survived, the doctors told his family as he lay comatose in the hospital, he’d probably be severely brain damaged.

But when Goulet finally came to, not only was he his old self, but he quickly learned that CPR had likely saved him. It was a life-changing experience.

Since then, Goulet, eager to save other people's lives, has become an EMT and performed CPR on countless patients.  He's also sought to encourage everyday people to learn basic CPR skills.

“It’s amazing,” he says after recounting what happened to him in the bar nine years ago. “If nobody knew how to do CPR, I would have never made it.”

Nurse wouldn't give up

Born and raised in Blackstone, Mass., owned a car repair business in his hometown before his life would forever change. It meant working long hours. When his friend stopped by the garage close to 11 p.m., he was surprised to see Goulet still at work.

On reflection, Goulet said he was fortunate he hadn’t been left alone — and even more fortunate that a nurse was at the bar when they got to the Millerville Club. When his buddy yelled for help, she began CPR and, when she tired, got others in the bar to help take turns.

Again and again they checked for a pulse. Nothing. It went on for about 15 minutes.

Town paramedics arrived after about 15 minutes. It was another seven minutes before they restored his pulse. Brain damage can occur after as little as three minutes without a pulse and death in as little as four to six minutes, according to the National Library of Medicine.

Goulet initially went to Landmark Hospital in Woonsocket before being transferred to Rhode Island Hospital. Meanwhile, an emergency room physician at Landmark, who after going home puzzled over what caused Goulet’s cardiac arrest, stumbled upon something in a medical text that he thought was the answer.

It was Brugada syndrome, an electrical disorder in the heart that can cause lethal arrhythmias and is sometimes genetic. He called doctors at Rhode Island Hospital and, although Goulet had no family history of Brugada, his suspicions were later confirmed.

Surgeons implanted a defibrillator in Goulet's chest to shock his heart when the abnormal ventricular rhythms occurred. But because they were happening so frequently, he later began taking a medication that dramatically reduced the need for those shocks.

Returning to running his garage was too stressful. So Goulet, who is married with children, set out to find a new career. After learning that his condition prevented him from becoming a truck driver, he began taking EMT courses, inspired by his own experience.

“That’s why I wanted to be an EMT. I felt like I’d have more compassion for people and what they were going through,” Goulet says. “If that happened to someone else, I wanted to help them the way people were able to help me."

Eventually, he earned an “EMT-Cardiac” license. After volunteering and working part-time for the Chepachet Fire Department, he took a full-time job in Woonsocket with Medtech Ambulance.

Coincidentally, on Goulet's first day on the job, he was assigned to ride with Michael Marcoux, who was the leader of the team of paramedics that helped save his life. As a deputy fire chief with the Blackstone Fire Department, Marcoux joined two other EMTs in taking over resuscitation efforts from the nurse, bar customers and a police officer who arrived moments earlier.

“It was an awesome team effort,” says Marcoux. When it comes to cardiac arrest, “very, very seldom do you have an outcome like Steven.”

“I’ve saved lives and gotten them to the hospital. Even if I hadn’t gotten a pulse back … [the emergency room] had a viable patient to work with,” he says. “ It’s a passion now. I’ve never been happier than what I’m doing now.” 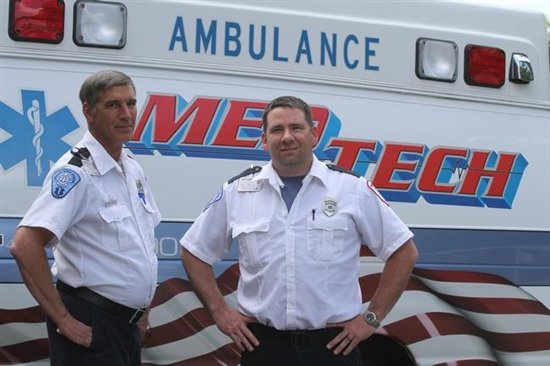