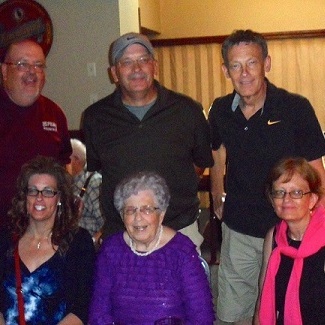 All five of my parent’s children have coronary heart disease.  This is our story.

Before I start, I want to tell you about the left anterior descending artery (LAD).  Because this artery provides much of the blood flow for the left ventricle, which in turn provides much of the propulsive force for ejecting oxygenated blood to systemic circulation via the aorta, blockage of this artery is particularly associated with mortality. In the medical community an ischemic heart attacks associated with this blood vessel is colloquially called a "widow maker”.

40 years ago, my father had a heart attack.  After spending two days in the hospital he passed away.  Prior to my dad’s death, his father, age 57, died of heart disease and after, his brother, age 47 died of an aneurysm.  Being so young and leaving my mother with five children, the doctors that took care of him during his stay recommended that she have an autopsy done.  They found 100% blocked in the left anterior descending artery and 100% blocked in the right coronary artery.

After my siblings and I all passed the 40-year old mark, I thought we would live along time and with no heart disease.  However, this was not to be the case.  Five years ago, my eldest brother, encouraged by his doctor, scheduled a heart calcium score test.  Due to his score of 500 he was sent to a Cardiologist, which led to a stress test, followed by a catheterization, and finally a stent.  He was 70% blocked in the left anterior descending artery.

A year ago, I had an appt with my new doctor.  Seeing my history, she asked me to get a heart calcium score test.  I was scheduled for that the day after Thanksgiving.  With results close to 800, this led to a stress test, followed by a catheterization and finally a stent.  I was 80% blocked in the left anterior descending artery.

At Christmas in 2012, I brought home heart calcium score brochures to share with my other 3 siblings.  Within the next year, they were getting this procedure done.  I never in a million years thought the next part of this would happen.

Before my younger brother was able to go in for a heart calcium score test, tragedy struck October 31, 2013.   Not feeling for a few weeks, which he attributed to allergies or the flu, he scheduled an appointment with his doctor.  He never made it to that appointment.  That morning my sister-in-law rushed him to Bellin.  He had quintuple bypass surgery but died five days later.  He was 49 years old.  He was 100% blocked in the left anterior descending artery, 100% blocked in the right coronary artery, and had blockages in 3 other arteries.

After this, my younger sister knew she needed to set up that heart calcium score test, and she did in November.  Her results were over 200, was sent to a doctor, had a stress test, followed by a catheterization and finally a stent, which took place on Tuesday, December 10, 2013.  She was 70% blocked in left anterior descending artery.

At a 6-month check with my doctor, early in December and feeling the same flu-like symptoms as my younger brother had, I wanted another stress test.  I ended up having another catheterization and a stent, which took place the same day as my sister’s, on Tuesday, December 10, 2013.  My sister and I had rooms next to one another on the 5th floor at St. Vincent’s.  I had an 80% blockage again in my left anterior descending artery, next to the first stent that was placed in December of 2012.

Another brother also experienced symptoms that took him to the hospital. It turns out he was 90% blocked in the left anterior descending artery and needed a stent.

Our lives changed so much this past year, especially for our mother, who lost a father-in-law, husband, brother-in-law and son, to heart disease.  My advice to you is eat a healthy diet, get regular exercise, and have a calcium score test every 5 years or more.