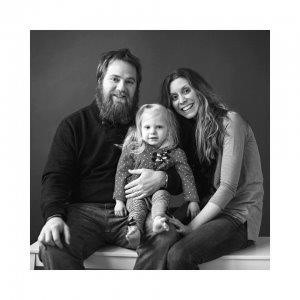 Tatum’s tangle of heart problems were discovered in the womb. At their 20-week ultrasound, Jamie and Cale Henderson were excited to learn they would be welcoming a baby girl. The other news that day wasn’t as joyous. Their unborn daughter had several problems with her heart. Doctors didn’t initially know the full extent of the condition. "It was devastating," Jamie said. "I thought I was going to carry a child that wasn’t going to live and I didn’t know where to go for help."

The couple from Cedar Rapids, Iowa, was referred to a pediatric cardiologist at the University of Iowa. Every few weeks, specialized ultrasounds and fetal echocardiograms provided more information about baby Tatum. "We were just hanging on from ultrasound to ultrasound, wondering what we’d learn next," Jamie said. The ultrasounds pointed to several possibilities, though nothing clear-cut. Yet the conversations with the pediatric heart surgeon gave Jamie and Cale hope.

Tatum was born July 4, 2011, weighing 6 pounds, 2 ounces. She also was very blue. She was put on oxygen and whisked into the neonatal intensive care unit. She underwent an echocardiogram shortly after being born. The next day, doctors performed a catheterization procedure to get a clearer picture of how her heart was wired. The official diagnosis was "Tetralogy of Fallot," a heart defect with several different problems. Tatum’s case was a variation, combining a rare set of factors that would be difficult for doctors to repair.

For instance, her pulmonary arteries – which are supposed to take blood to the lungs – weren’t doing their jobs, so the heart developed additional vessels to compensate. But those vessels didn’t have the capacity Tatum’s heart needed, keeping her body from getting enough oxygen; that’s why she was blue. She also didn’t have a pulmonary valve. "She was born suffocating, basically," Jamie said.

Tatum underwent open-heart surgery when she was eight days old. She remained hospitalized for a month, then went home hooked up to oxygen tanks.

A month later, Tatum underwent another catheterization procedure to see how things were progressing.

Her pulmonary arteries weren’t growing as doctors hoped, but the other vessels were continuing to grow. The surgeon at the University of Iowa felt he could make the repairs needed, but it would take at least two surgeries. The family was referred to a specialist at the Lucile Packard Children’s Hospital at Stanford University in Palo Alto, California, who could possibly do it in one.

They flew west in mid-December. The surgery took nearly 11 hours. And it worked. Tatum spent eight days in the hospital, much of it spent with her body learning how to function with a heart that was now functioning in a new, better way. Once home in Iowa, Tatum received oxygen at night only for the first few weeks as her heart and lungs healed.

Since then, Tatum has mostly become a normal toddler – jumping and doing gymnastics, although weight gain remains a challenge. Tatum undergoes an echocardiogram every six months and a heart catheterization.

Jamie says Tatum’s journey has given the family a new appreciation for the research supported by the American Heart Association.  "The AHA gives us a place to belong and where other families can relate in some way, or many ways, to our situation and us to theirs," Jamie said. "Heart complications do not discriminate based on age, gender, etc., and the AHA offers support for all.