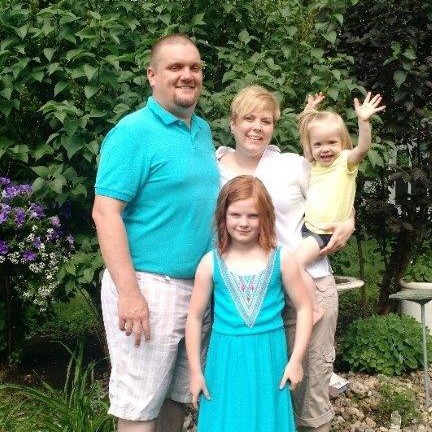 One word…TERRIFYING.  That is how Ross Blake describes the events on July 20, 2009.  He, along with his wife Jackie and their young daughter Madelyn, had just embarked on a road trip to see his sister in Eastern Iowa when Jackie started to complain that she could not see while driving.  After guiding Jackie to gently press the brakes while he steered the car onto the side of the road for her, Ross called 9-1-1.

Jackie was transported to a local hospital via ambulance where her symptoms worsened.  She began vomiting and had difficulty speaking.   Doctors performed a CT scan that came back clear, so Jackie was diagnosed with a migraine and sent home to rest.  But shortly after leaving the hospital Ross saw that his wife’s eyes were pointing in two different directions.  One aimed at him, and one looking down to the center console in the car.  They headed back to the hospital where it was determined that Jackie needed to be transported to Des Moines for further evaluation.  They would soon discover that Jackie was having a stroke, and that she needed emergency surgery to dissolve the clot in her brain.

"There is a 30% chance that your wife will survive surgery.  If she does, she will likely be in a nursing home."

As Ross heard those words and sent Jackie into surgery, he thought about the possibility of losing his wife and raising their daughter alone.  It was the worst feeling ever.

Thankfully, Jackie survived surgery, but it was still yet to be determined what kind of condition she would be in when she woke up.  At first, she couldn’t write or talk, so Jackie tried using sign language.  The nurses taught her how to suction the saliva out of her own mouth because she couldn’t swallow.

Over the next two weeks Jackie spent 6 grueling hours in therapy at the hospital each day, learning to walk, learning to talk, remembering colors and fighting to get stronger so she could hold her daughter again.  The sight of his wife in that condition caused a variety of emotions for Ross…terror, sympathy, sadness.  But one day her sarcasm and sense of humor returned, and Ross knew she was going to be ok.

Upon being released from the hospital Jackie continued to slur her speech, she was easily irritated and things still felt a bit "cloudy", so she continued going to speech, physical and occupational therapy sessions for four months to get better.  Her mother and mother-in-law came to help take care of Madeline until Jackie was able to multitask and it was safe for her to be alone with her daughter.  She learned how to drive again and was able to return to work full-time that December.

Today, at age 36, Jackie now has two beautiful daughters, Madeline and Clara, and she lives with a self-described "new normal".  The lingering effects of her stroke cause panic attacks and migraines, speech can still be difficult, she makes lists for everything so she doesn’t forget, and her emotions are heavily impacted by those around her.  But, more importantly, Jackie and Ross are determined to raise awareness that strokes can happen to anyone, at any age, and to help others recognize the risk factors and warning signs.  They are thankful to Jackie’s amazing medical team who brought her back, and for the incredible research and technology that are impacting the lives of stroke patients everywhere.