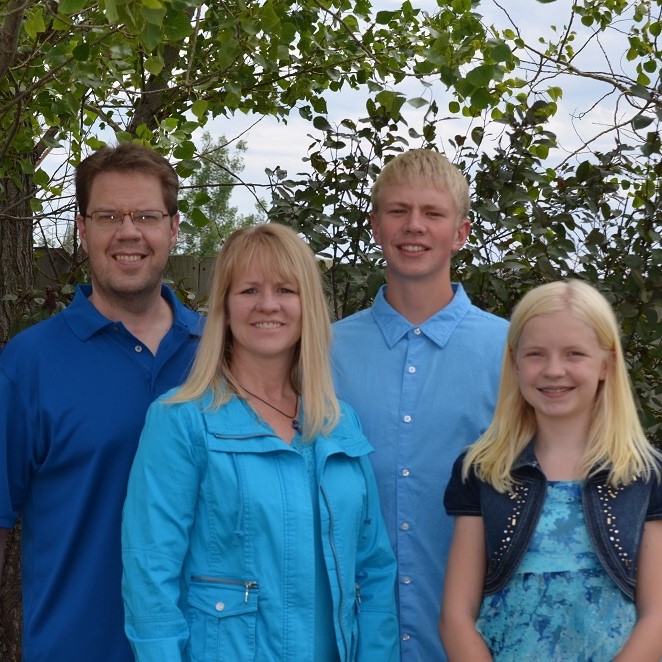 Meet the Brad and Kristi Wellendorf Family from South Dakota.  Their story could happen to anyone.  We applaud their courage to share their story with others so that others will take the time to learn CPR.  It saved Brad's life.

It was a Wednesday night. We met at our 8th grade son’s baseball game.  Brad had to help with field prep, but he had a difficult time raking.  He was not able to catch his breath and was really thirsty.  Unfortunately, he didn’t share this information with anyone and it wasn’t the first time he felt this way.

In the middle of the night he got up to go to the bathroom, and woke me up thankfully.  The next sound I heard was a choking and gasping sound coming from my husband.  When I turned the lights on his arms were crossed in front of his chest, his thumbs between his fingers, eyes fixated and he was making that awful sound.  Our 12 year old daughter first came into the room, then went out to the living room to get the phone.  We called 911. After telling the dispatcher our name, address and what was going on, Brad went limp.  I handed the phone to Lindsey for the remainder of the time.  I got him on the floor and started CPR.  The dispatcher on the phone was instructing me on what to do, but my training from 30 years prior kicked in and I knew exactly where to place my hands and how to deliver the compressions.  She and Lindsey had to do the counting out loud because I felt like I was hyperventilating.  I sang “Staying Alive” in my head to keep going fast enough.  This was different from my initial training, but I had seen the PSA video snippets on “Good Morning America” and other news shows in the months prior.

I’m not sure how long into the CPR compressions it was before our son woke up and came into the room wondering what we were doing at 4 o’clock in the morning!  He immediately saw the dire circumstances we were in and switched spots with me.  We continued to ‘tag team’ with the compressions. During the times when he was working on his father, I was able to quickly get dressed, put the dog into another room, open the front door and turn on all the lights for the paramedicss to find us and come in.  I would later tell people we were like a well-oiled machine the way the three of us worked together, doing what needed to be done, and keeping our wits about us all while the man that we loved lay on the bedroom floor dying.

From the time the ambulance was dispatched to arriving at Brad’s side, 14 minutes had passed.  It felt like it was a minimum of 30-minutes plus to us.    The report showed that they had to shock him two times and there were three attempts to intubate him. By this time 26 minutes had passed. Finally 33 minutes after the ambulance was dispatched he had a pulse, blood pressure and oxygen readings.  They transported him to the hospital.   I was taken by a police officer to the hospital and the kids stayed with a family friend who came over as soon as I called.

Brad was taken to the cath lab and a stent was placed to open his completely blocked LAD.  This was all completed within 90 minutes from dispatch time.  He was also placed on the hypothermia protocol in the ER and was kept cool for almost 24 hours.  Brad was attached to a ventilator, the cooling unit, a heart balloon pump, blood circulating cuffs on his legs, and four trees full of medication when I saw him next in ICU.   A few hours later he was back in surgery to repair a femoral artery tear.   Every doctor and nurse who heard about my son and I doing CPR on Brad told us how we saved his life or thanked us for doing what we did so that they were able to do what they did for him, because without us, they would not have had him as a patient.

Brad remained in a coma in the ICU unit. His brain was in near complete seizure activity. It did not look like he was going to come out of the coma, and end of life and organ/tissue donation was being discussed.

Then 252 hours - 11 days - after the cardiac arrest he moved his leg.  It was 384 hours after the arrest he started talking.  He did not know who we were, he just knew we were important to him.   It took another couple days to call me by name and another to say our son’s full name, and several more days to realize who our daughter was.  During this time prior to going into the rehab hospital here, he had no pain sensation at all.  He couldn’t feel when they took his blood, tested or touched his feet or even when his hand was caught between the bed rail and the table.  This part of his brain hadn’t found it’s new pathway yet.

His recovery really accelerated after what he called his ‘superman nap’ on his second day in rehab, the 23rd day after his cardiac arrest.  He described it that he could ‘see’ the synopsis and neurons reconnecting.  This is the same man who couldn’t say the months of the year or days of the week yet without help or extreme delay, or remember what number he was on long enough to continue to count.   He was able to relearn to walk and his balance improved to be independent. His brain-processing  improved through therapy enough to be able to come home after 13 days in rehab and 35 days from the cardiac arrest.  He continued with out-patient therapy for many months and went back to work on a very limited basis two years later.

We are so fortunate that we were at home with Brad when his attack happened and were able to experience a true miracle.