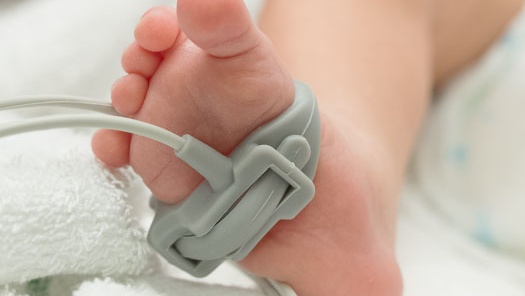 Heart problems are the most common type of birth defect, and until very recently many life-threatening defects went undetected until babies were already home from the hospital.

Frantic parents sometimes noticed symptoms only after it was too late to save a baby’s life — or when a sicker heart needed more complex or riskier procedures.

One early test that’s helped find congenital heart defects soon is a simple exam called pulse oximetry, which can detect measure oxygen levels through a toe or finger monitor. During the past five years, the American Heart Association and other groups have lobbied to pass measures in almost every state requiring the exam before babies leave the hospital.

Now, the next big challenges are ensuring all babies quickly get the care they need and that experts get the data they need to evaluate the care, say pediatric and public health experts.

“Right now, we’re in a good place in terms of doing the screening. But tracking how well hospitals are doing is far more challenging,” said Dr. Matt Oster, an expert on pulse ox and a pediatric cardiologist at Children’s Healthcare of Atlanta. Oster has studied pulse oximetry testing and authored several papers on it.

While statistics are difficult to track definitively, the Centers for Disease Control and Prevention estimated about 875 babies could be identified each year through pulse ox.

“We want to be able to catch them before they leave the hospital,” said Marci Sontag, associate director of NewSTEPs, a group of public health officials that aims to detect and treat all birth defects.

Pulse ox exams became commonplace in the U.S. after studies in Sweden showed the test’s effectiveness. In 2011, then-Secretary of Health and Human Services Kathleen Sebelius recommended it be added to the Recommended Uniform Screening Panel for newborns.

States began to adopt the recommendation, and now all but five have regulations or laws mandating it. Connecticut, Florida, Idaho, Vermont and Wyoming are holdouts, but efforts are underway in each.

New Jersey was the first state to legislate pulse ox screening. The state implemented screening within 90 days of birth. That screening identified a baby on day one with a CHD, saving his life.

But even after such a great start, other states have had to find their way collecting and analyzing data to measure results, Sontag said. For data to be analyzed nationally, states must each collect information on how many babies are screened, the results and, ideally, the follow-up.

However, data will only be useful if collected, analyzed, and applied in a timely manner, Sontag said. Data can be used to evaluate program impact, to determine public health interventions, to monitor progress, to determine populations to target for an intervention, to determine barriers to care, and to influence public policy.

Only a handful of states are reporting data that Sontag’s group and others need, she said. Such good record-keeping and analysis can be difficult and expensive, she said.

In an article published this summer in the journal Pediatrics, Oster and others, including Sontag, identified other key gaps in ongoing pulse-ox improvements.

They included: confusion over CHD and what it is and debate among healthcare providers about the appropriate evaluation for a positive screening. The term itself is not even well defined, the authors wrote.

For example, seven of 13 specific defects are considered targets of the screening.

And yet, the CDC considers five additional defects when studying screening. This leads to confusion at the bedside of a newborn but also in studying data, Oster said.

More research is underway. The AHA and The Children’s Heart Foundation jointly committed at least $22.5 million over the next two years to support innovative research projects on CHDs.

In the meantime, Oster is optimistic about the progress so far.

“I’m happy to see that more babies are being screened, but we have a ways to go to ensure that screening is done in a quality manner,” Oster said. “But every effort is being made to collect the data, and we’ll get there.”