New government statistics show a decline in deaths from heart disease and stroke, continuing a promising trend in the fight against two of the nation’s leading causes of death.

The stroke death rate fell 2.6 percent and the heart disease death rate dropped 1.8 percent in 2012, the most current year for which those statistics are available, according to the Centers for Disease Control and Prevention.

The CDC report is part of a much larger trend over the years – including a more than 30 percent decline in the death rates for heart disease, stroke and overall cardiovascular diseases from 2000 to 2012.

“This very encouraging trend is what we hoped to see, and we should all feel proud of our contributions to these findings through our lifesaving initiatives at the American Heart Association and American Stroke Association,” said AHA President Elliott Antman, M.D., professor of medicine and associate dean at Harvard Medical School and a senior physician in the Cardiovascular Division of Brigham and Women’s Hospital in Boston. “We have much work left to do, but we’re heading in the right direction.”

Heart disease remains the nation’s leading cause of death and has been for more than 90 years. Stroke still ranks fourth.

The reductions in deaths, experts say, can be attributed to ongoing efforts to better prevent, diagnose and treat heart disease and stroke, including:

However, despite the substantial progress in heart disease mortality, not everything is going well.  More people than ever are now living with cardiovascular diseases and dealing with risk factors such as obesity, high blood pressure and unhealthy diets.

In the U.S., 82.6 million people are living with cardiovascular diseases, including the after-effects of heart attacks or strokes.

“Although we’re keeping more people with heart disease or stroke alive, we also need to work harder to prevent these events. And there is much to do to improve the quality of life for all our patients, and those individuals who may avoid being patients, through prevention,” said Donald Lloyd-Jones, senior associate dean, chair and professor of preventive medicine at Northwestern University Feinberg School of Medicine and an AHA volunteer.

The American Heart Association’s 2020 goal addresses this issue by calling for a 20 percent improvement in cardiovascular health, in addition to reducing deaths by 20 percent, by the year 2020.

“We understand what causes 90 percent of heart attacks and strokes and we need to do an even better job at avoiding those risk factors in the first place,” said Lloyd-Jones, a key contributor to the statement outlining the science supporting the 2020 goal. 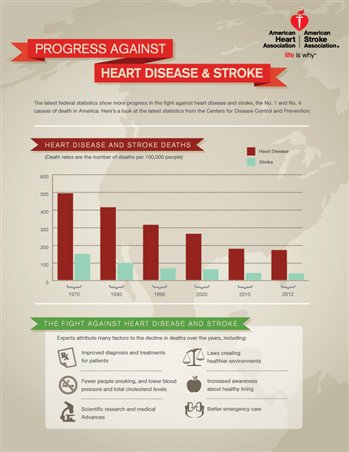