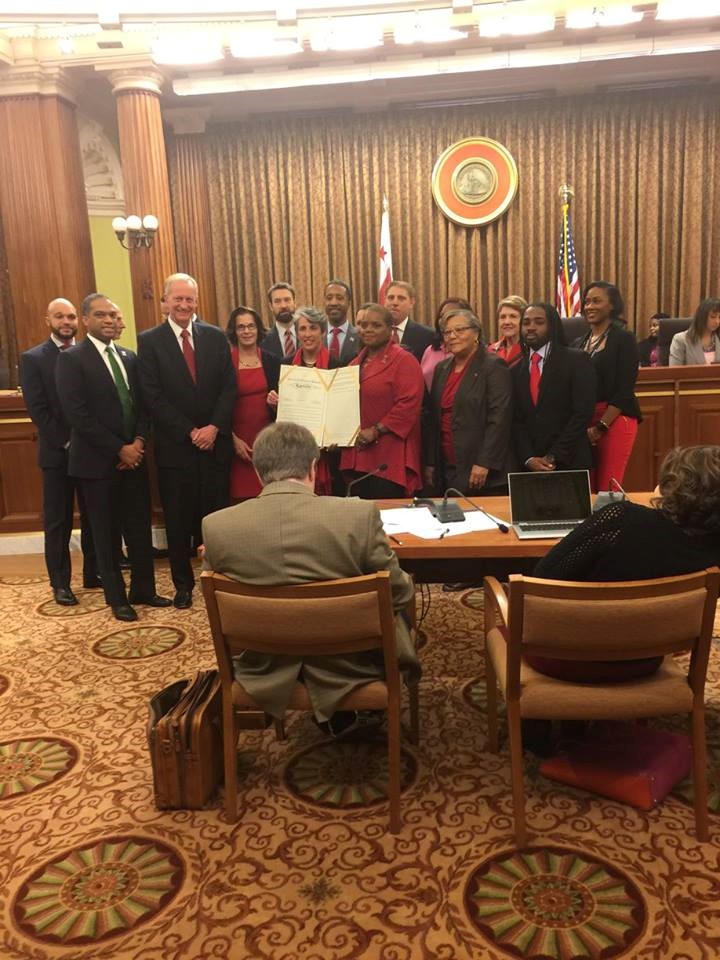 The 2016-2017 fiscal year was a busy, but fruitful year for You’re the Cure advocates in the Greater Washington Region.

From holding press conferences to speaking with councilmembers, volunteers worked hard to pass policies and raise awareness about heart disease and stroke. You’re the Cure advocates are essential to the American Heart Association’s work by telling their stories and helping to create an environment where real change can take place in the community. AHA could not make such a big impact without them!

“Knowing that 80% of heart disease is preventable, I want to speak up and speak out to everyone that with eating right, exercising and not smoking you can save your own life. Having lost everyone in my family to heart disease, I will work tirelessly and endlessly to prevent needless deaths, including my own and my children,” said You’re the Cure advocate Gail Mates.

Take a look at what we accomplished together as we recap the policy successes in Greater Washington from the 2016-17 fiscal year.

CPR in Schools: In July 2016, Washington, DC joined more than 35 other states when the DC Council approved a policy that ensures all District students receive hands only CPR training before they graduate high school. You’re the Cure advocates, including Jennifer Griffin, worked tirelessly to ensure this law would pass by sharing their personal stories with Councilmembers, testifying at hearings, speaking to media, and participating in CPR trainings.

Tobacco control policy: In October 2016, the DC Council voted in favor of three significant bills, strengthening DC’s tobacco-free environment. The bills will: limit access by raising the minimum purchase age for tobacco products to 21 years; reduce exposure by prohibiting the use of electronic cigarettes in public spaces; and strengthen tobacco-free laws by eliminating smokeless tobacco use in sports venues. You’re the Cure advocate Deb Wells made an impact by testifying before the Council about losing several family members to diseases attributed to smoking.

Healthy Vending: All vending machines on Montgomery County property will now provide healthier options thanks to the passage of healthy vending legislation in April 2017. You’re the Cure advocates sent over 100 letters to their Councilmembers, testified at hearings, and spoke to media. You’re the Cure advocates, including Gail Harris-Berry and Dionne Bush, are now hard at work advocating for healthy vending in neighboring Prince George’s County.

Day at the DC Council: More than 40 You’re the Cure advocates and several other organizations came together in May 2017 to spend the day at the DC Council speaking directly with Councilmembers about strengthening tobacco control policy. Their focus was to educate Councilmembers and encourage them to increase the District’s cigarette tax to discourage use, fund the Tobacco 21 law, and increase funds for tobacco control programs. Advocates met with all 13 members of the Council, making sure their voices were heard.

This past year’s successes highlight advocacy in action. Constituents have the power to make change when they are passionate and get involved! Thank you to all of our You’re the Cure advocates for the hard work they do to make lasting impacts in the Greater Washington Region. Because of their efforts, we are now closer to lifting the burden of heart disease and stroke.

AHA’s Greater Washington Board President Dr. Richard Benson summed it up best: “Washington, DC is the place to be, especially when it comes to cardiovascular disease and stroke. Over this past year, we have made CPR a requirement for all in our region to graduate from high school, improved the environment by making our ballparks smoke free as are other public establishments in the area, and created healthier options in our local vending machines. So, come to DC: “we are the cure!”