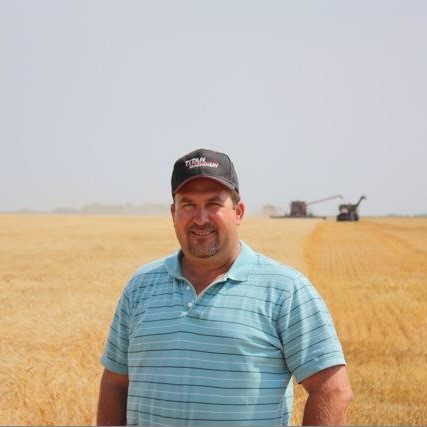 Ryan Radermacher knew something was wrong.  It was a hot, muggy day, but not enough to cause heavy sweating.  Ryan had been repairing equipment and getting things in order for the upcoming harvest.  He was working hard, but nothing to strenuous.  Ryan also felt some pressure in his chest and his arm was aching.

“I was wringing wet. Every pore was sweating,” says Ryan, recalling Sept. 1, 2011. “I went into the house to cool off. I was sure I had heat exhaustion or heat stroke.”

His wife, Kim, checked in with the Ask-a-Nurse hotline and that's when they decided it was time to dial 9-1-1.  Now was not the time to play Mr. Tough Guy.

Calling 9-1-1 activated a team that responded with a finely tuned response.

For the next several minutes, the Radermacher farm became the center of activity. A first responder arrived, taking Ryan’s vitals and giving him oxygen, several other ambulance services followed.  They all worked together in a well-practiced, coordinated effort to rapidly connect Ryan with the high-level care he needed.

“It was a little different being on the patient-side of things,” says Ryan, who served 25 years as an emergency responder.

“Part of me couldn’t believe this was happening,” says Ryan. “I was 45, harvest was a month away.   Really? A heart attack? Now?”

A well-prepared heart team was waiting for Ryan.  Advanced tests in the cardiac cath lab showed Ryan had a complete blockage in his right artery. Angioplasty cleared the blockage, and then a stent was inserted to help keep it open.

Today Ryan practices what he learned at Cardiac Rehab: he exercises regularly, takes heart medication as directed, follows a heart-healthy diet and gets his checkups.

“That heart attack put a scare into me,” he says. “Now I really try to take care of my health and I take the time to enjoy life. Family comes first. Going through this experience definitely changed my outlook.”

He reflects on the rapid response that saved his life. “It’s pretty amazing,” he says. “From the EKG in my driveway to the stent in the cath lab, it took just 38 minutes. Because of that, I’m here, I’m feeling great and I have no heart damage. That’s impressive.”

The most deadly type of heart attack, STEMI occurs when blood flow is completely blocked to a portion of the heart. The blockage can best be resolved with angioplasty, but it must take place quickly. National standards call for 90 minutes or less for optimal success.

Do your part!   If you or someone you’re with is having a possible heart attack, do not delay.

“When your body is telling you something, you better listen,” says Ryan. “Don’t tough it out. Call 911 and get the help you need.”