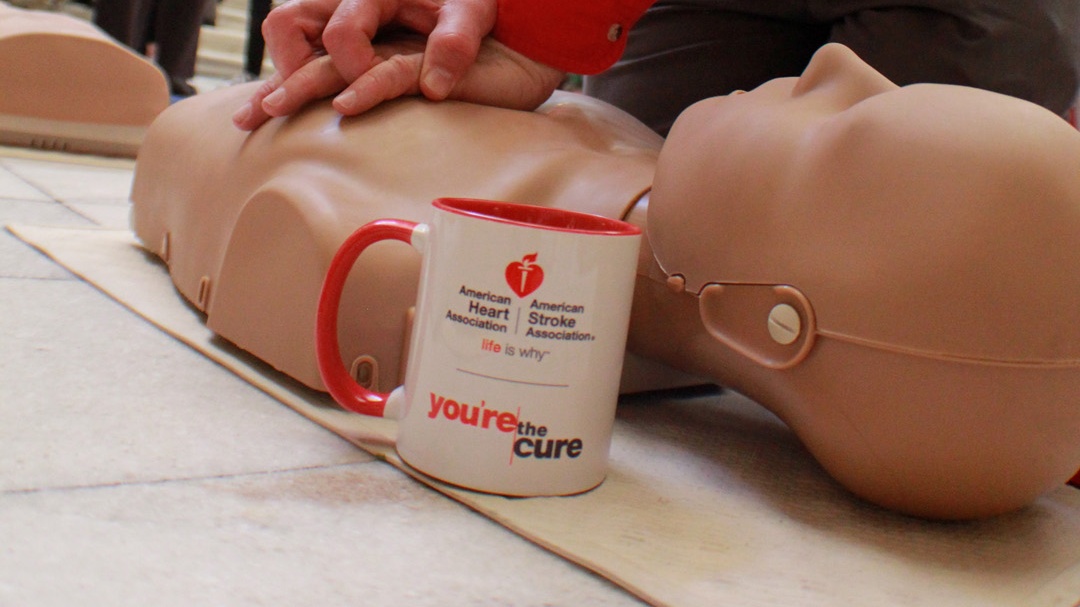 This month, we started 'Mugtalk Mondays' where we will highlight extraordinary You're the Cure advocates across the Greater Southeast Affiliate of the American Heart Association. Michael Charles is the first advocate we highlighted!

When I met Michael Charles, I knew he was extraordinary. His passion for educating the public about early CPR and the use of an AED is contagious. When he's working as a paramedic, he's out in the field saving lives. When he's off the clock, you may just find him at the Georgia Capitol, ten manikins on the marble floor, music pumping at 100 beats per minute to help keep time of chest compressions, surrounded by visitors and legislators alike.

"My grandfather died of sudden cardiac arrest secondary to heart disease in 1979.  It happened in the City of Atlanta/Fulton County.  Family members were present when he collapsed.  No witnesses started CPR because no one there knew CPR.  AED’s in the community were unheard of at that time.  It took the ambulance 10 minutes to arrive.  By that time it was too late.  I chose the EMS profession to be part of a system saving lives from heart disease death."

Michael has been a paramedic since 1985 at Grady Health System in Atlanta.  Additionally, he has spent 30 years promoting the lifesaving skills of CPR and educating the public on heart disease prevention and risk factors.  Throughout his career, he has held many leadership roles in the EMS field and has been recognized numerous times for saving lives in the field.

“As I think back on all the sudden cardiac arrest resuscitation attempts in which I was involved, the survivors most always had three things in common: their collapse was witnessed, someone started CPR immediately, and the victim received a shock from a defibrillator in less than a few minutes. In witnessed sudden cardiac arrests when the victim is provided immediate bystander CPR and defibrillated within a few moments with an on-site AED, survival rates have reached as high as 80%. Their survival had less to do with what a paramedic and a hospital did, but had much more to do with what happened before EMS got there. It’s clear to me now that the best way I can help improve the outcome of sudden cardiac arrests in my community is to educate and train as many members of the general public as possible in CPR and AED. Bystander initiated CPR by witnesses and an onsite AED are a victim’s best hope of survival," Michael states.

In 2013 Michael began developmental work on The Better Outcomes Foundation, Inc., a non-profit volunteered-staffed health and safety training organization. They provide high-quality, highly accessible, low or no cost training in CPR and AED use to Fulton County at-risk communities and prehospital emergency responders who serve them.  Its vision is to play a critical and significant role in improving the out-of-hospital sudden cardiac arrest survival rate in historically at-risk populations in Fulton County / City of Atlanta, Georgia.

Not only is Michael a volunteer with the American Heart Association's You're the Cure Network; in October 2013, he was team captain for the Grady EMS Heart Walk Team for the Metro Atlanta American Heart Association Heart Walk.  As team captain, a challenging but rewarding position, he led his team to raise more money than any other of the 31 Grady Memorial Health teams.

In June 2015, Michael became a heart attack survivor.  He suffered an acute heart attack of a complete blockage of the left anterior descending artery commonly known as “the widow maker” at the age of 59.  He had an amazing recovery and returned to full work duty three weeks later.

Being a survivor, an advocate for bystander CPR, and an AHA fundraiser doesn't seem extraordinary to Michael.  He doesn't think he is going above and beyond.  He thinks he is spending time doing what needs to be done to save the lives of Georgians.  Something he believes can be done through education and policy change.

Well, we think you are extraordinary, Michael! You're the Cure.

Want to be an extraordinary You're the Cure advocate? Join us at www.yourethecure.org/join!