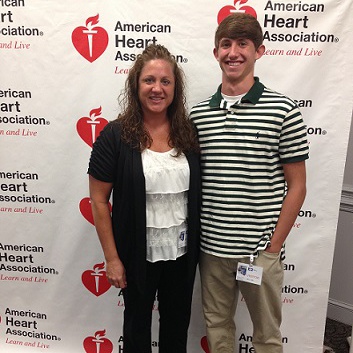 The story of Tyler Free begins when he was born June 15, 1998. He was the healthiest, cutest little boy with the sweetest smile. Tyler grew up the youngest of four and has always been the breath of fresh air and laughter for each of his siblings.

Tyler has a heart of compassion, forgiveness and thoughtfulness. He loves to smile and for many that are around him, his smile is contagious. Competition sports has been a part of our family for generations. Tyler loves sports and has participated in several different sporting leagues. He has always been a team player and dedicated to the sport of choice.

THE GAME:  It was football season again, and it was the anticipated Monday night 9th grade football game between the Ocean Springs Greyhounds and the D’Iberville Warriors. The stands were full with supporting community members and parents eager to watch the game. Our family was there to support Tyler, who was a wide receiver for the Greyhounds. During an offensive snap for the Greyhounds, a player fell to the ground.  Everyone grew silent and waited to see who the injured player was. People started running to the field.  Coaches were screaming for a doctor. Tyler’s brother, Kyle, runs to the field and screams that it was Tyler.

For what seemed like an hour, I waited with the support of our Greyhound family for some kind of positive response from the field.  As I prayed with many, the positive response was his life.  On that Monday night, October 7, 2013, my son - a healthy, athletic, 15 year old athlete - died from sudden death cardiac arrest.  His life was saved by the trained, attentive individuals by means of CPR and by administering an AED device to shock his heart and revive him.

HOSPITALS:  The ambulance came to the field and brought Tyler to Ocean Springs Emergency Room.  Tests confirmed his critical state, and necessary arrangements were made to transport Tyler via ambulance to USA Women and Children’s PICU in Mobile, AL.  Tyler arrived at USA and immediate tests were ordered.  These tests confirmed that Tyler had suffered a heart attack resulting in death and permanent damage to his heart.  The cardiologist at USA recommended for Tyler to be air lifted to Batson’s Children’s Hospital in Jackson, MS due to his confirmed critical state and the advanced Pediatric Cardiology Team with resources necessary to help Tyler.

The flight to Batson’s was quick and exciting for Tyler.  Although fearful and uncertain if he will 'die again,' Tyler faced another obstacle of this journey without complaint.  He continued to smile.  Test results started coming back and many questions were answered and ruled out or confirmed. When certain things were ruled out, it required additional testing for answers. They prepared us with the knowledge that the tests would not stop until the answers were found.  We learned things that felt unbearable to accept and yet, we witnessed a strength within Tyler that would not allow anyone to have doubts.

THE HUNT FOR ANSWERS:  On October 10, 2013, during the first heart catheterization exploratory procedure, a blood clot was found in Tyler’s heart, as well as evidence of several other blood clots that had left their mark.  The team did an immediate angiogram and blasted the clot and Tyler’s blood flow resumed normally.  Tyler had suffered from “the silent killer” we have now learned about from education provided by the American Heart Association. Tyler felt no pain before he collapsed.  He had a small complaint of what he felt was a familiar “heart burn feeling” earlier in the day.  He said that he felt a little light headed and that was the last thing he remembered before he collapsed.  He also experienced no pain or disorientation after he was revived.  His dedication and adrenaline had him focused to try to jump up and continue playing in the game, as if nothing had happened.

“Why does a healthy, athletic, 15 year old boy have recurring blood clots in the heart resulting in cardiac arrest?” This was the new research question for Tyler’s physician team.  Tests were coming back with conflicting results. Tyler’s team felt that an Implanted Cardioverter Device (ICD) should be implanted in Tyler's body as a 'back-up plan' to shock his heart, should his heart ever stop again due to a clot or any other reason.

Still without answers as to why this was happening, on October 18, 2013, Tyler had a second heart catheterization procedure and the device was implanted.  During this procedure, Tyler experienced hemorrhaging complications and was placed on a life supporting device.  After careful monitoring, his physicians felt like Tyler was recovering at a fast pace.  They began forcing Tyler to breathe on his own and maintain balanced vital signs.  Tyler overcame this obstacle with additional chest tubes, kidney failure, and an implant in his heart with strength and courage.  Tyler continued to fight and heal until we were released to come home four weeks from that dreadful night in October of 2013.  We were happy to come home, but still scared since there was still a, "Why?" or "Will this happen again?"

We made weekly visits to Jackson, Mississippi, for Tyler’s physicians to run more tests.  There were many up and down results.  Tyler struggled emotionally, as well as the obvious physical limitations.  He had tremendous support from his friends, teachers and community.  During these trying days, his challenges became the priorities of others.  It was so humbling to experience the goodness within people and how that goodness created strength for us all.

FINALLY:  After months of waiting and agonizing for an answer, the Mayo Clinic produced an answer... three and a half months later.  Tyler has a rare blood disorder that causes clots within his body, but mainly in the heart.  Heart medication, blood medication and heartburn medication were implemented into his daily routine from that point on and for the rest of his life.

CURRENTLY:  Tyler has been released to enjoy life as a healthy teenage kid.  He goes though testing with his blood and heart every three months.  His implanted device transmits all heart activity and images through a monitoring system from our home to his cardiology team at Batson’s Children’s Hospital daily.  His heart function has actually improved.  Although some personal sporting goals were not able to be reached by Tyler, his life has been challenged, changed and enhanced by this experience.  Tyler has learned, survived and wants to share his story to help others know the importance of medical research and CPR awareness. Tyler’s continued life is a product from the existence and dedication of The American Heart Association.  Without efforts to increase funding and education to the public and medical fields, Tyler Free’s story would not have included the incredible chapters yet to be written.