On Sept. 3, 2016, after a night of visiting friends, Mike Miller and his girlfriend of 11 years returned to the home they had moved into four days earlier. Just after 11 p.m., the two sat down on their couch, and that’s when Miller began acting strange. First, he told his girlfriend, Lyndsey Albright, that he felt tired. Then he took off his glasses and began crushing them in his hand. Believing he was having a seizure, Albright called 911. At that point he was no longer breathing, and she was instructed to begin CPR.

Albright didn’t know at the time, but Miller, then 42, was experiencing sudden cardiac arrest.

And despite the efforts of Albright and emergency responders, Miller died. For 10 minutes, he had no pulse.

About a week later, he was standing in line at Walgreens waiting for a prescription and contemplating that very fact. 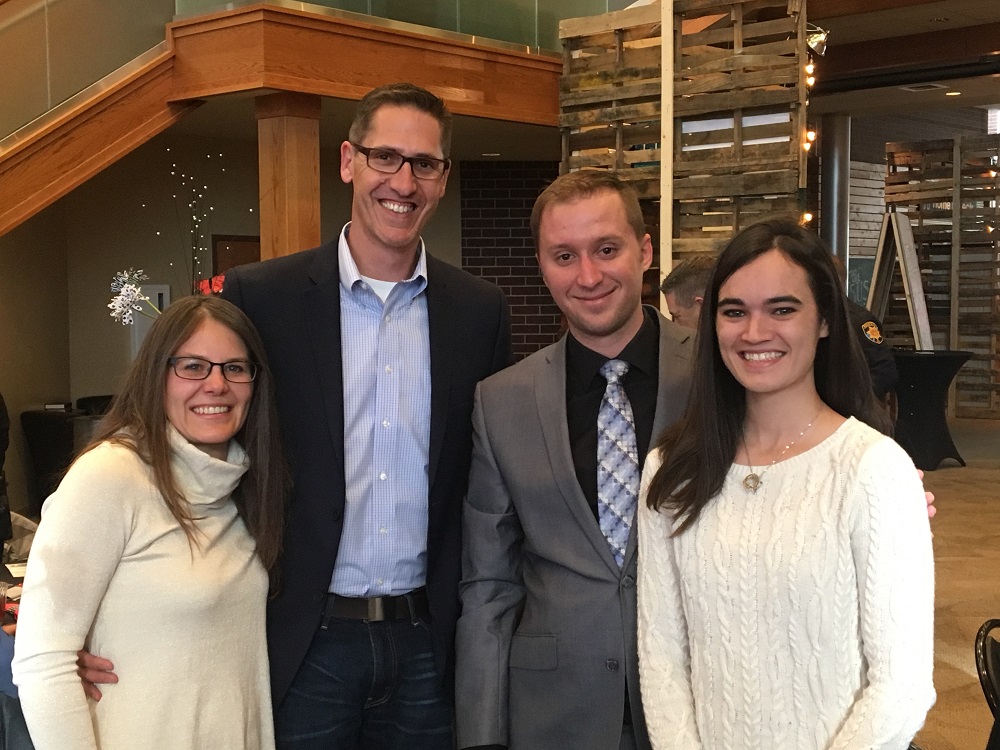 Lyndsey Albright, Mike Miller, Jerod Baertsch and Katie Bowers pose for a photo at an award banquet where Baertsch and Bowers were honored for their work as 911 dispatchers helping to save Miller from cardiac arrest.

In the following May, Two Douglas County 911 dispatchers, along with Albright, Miller and Norris Croom, deputy chief at Castle Rock Fire and Rescue, gathered in a room at the Douglas County’s Sheriff’s Office to reflect on the teamwork they say saved Miller’s life that night.

Katie Bowers, the dispatcher who walked Albright through CPR, and Jerod Baertsch, the dispatcher who relayed the call to emergency responders, and fire department’s crew that went to the scene, were honored by the Castle Rock Fire Department for their work handling Albright’s call.

Sudden cardiac arrest is not the same as a heart attack. It is a condition in which the heart suddenly and unexpectedly stops beating, preventing blood from flowing to the brain and vital organs.

Miller and Albright said he’d never experienced anything like it before.

Immediate action is needed to save a victim of sudden cardiac arrest. For Albright, who hadn’t had CPR training in more than a decade, having Bowers walk her through CPR over the phone was crucial.

“It makes all the difference in the world,” Croom said of quick CPR. “The longer you’re going without moving blood, the chances of you surviving exponentially decrease there. So, the fact that she was there, immediately started CPR, had the instructions from dispatch, all those pieces came to play.”

Bowers and Baertsch give credit to Albright.

“I went back and listened to it last week,” Bowers said of the 911 call with Albright. “It’s amazing. She did such a great job.”

On the 911 call, Albright can be heard telling the dispatcher — Bowers — that her boyfriend was convulsing and gasping.

“You’ve got to hurry,” Albright said before Bowers walked her through CPR, telling her how to position Miller, where to place her hands and how quickly to pump his chest.

“Stay on the line and I’ll tell you exactly what to do next,” Bowers assured Albright.

“One, two, three, four,” Albright chanted over and over as she administered CPR to the rhythm Bower paced for her.

Her voice trembled slightly, and though clearly afraid, Albright did not lose control, instead answering each of Bowers’ questions while relentlessly continuing with CPR.

When paramedics reached the house, Bowers ended the call, not knowing what had happened to Miller.

Miller can barely recall the night of his cardiac arrest, or of the days that followed.

Albright is there to fill in the holes. She reminds him that approximately four hours after he was taken to the hospital, he was awake and talking with paramedics who had come to check on him.

He was home less than a week later.

In Miller’s case, Croom said, 10 minutes without a pulse is longer than they’d like to see.

“Typically, at eight minutes you start seeing brain death. At the eight-minute mark is when the brain has not received oxygen. However, that’s where the CPR piece comes back in,” Croom said, which would have helped circulate oxygen back to the brain. “So, again, when you start looking at the 10-minute mark, that’s pretty significant.”

Tests couldn’t conclude what led to the cardiac arrest but Miller now has a pacemaker and internal defibrillator in case it were to happen again.

Miller and Albright were avid mountain bikers before the incident and still are, although Miller takes fewer trips.

While he’s not fully back to the physical shape he once was, Miller said, he has his wits about him. Because of his lapse in memory Miller mostly chimed in with quick jokes throughout the group’s conversation, eliciting laughs and warm smiles from all.

He’s positive, but in regard to his brush with death, he’s not sure how to feel.

“Have I come to terms with it?” Miller said of knowing that for 10 minutes he was gone. “I don’t know.”

What he does know is how grateful he is to be alive. And to have met his rescuers, whose humility he says is “awe-inspiring.” 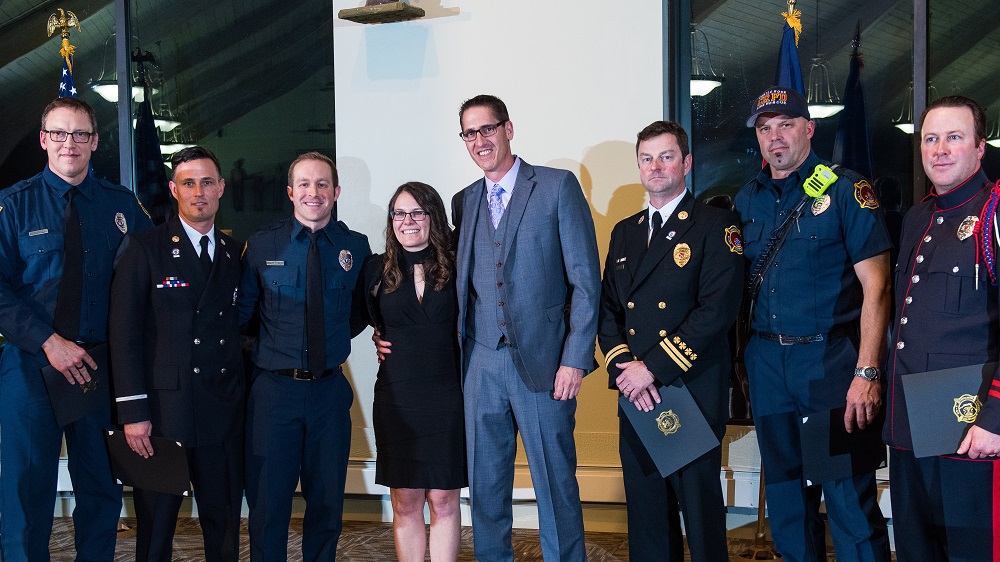