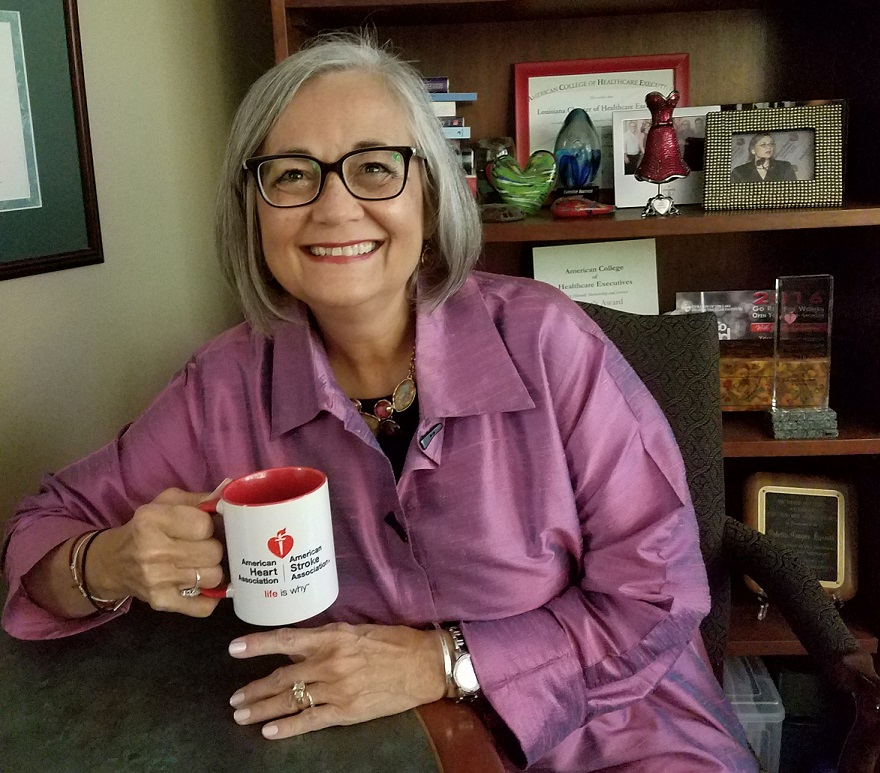 Coletta Barrett is a name that is heard often when American Heart Association Advocacy staff get together to talk about the happenings of policy-related work in Louisiana. That’s because she is involved in it all! Whether it is contacting councilmembers to ask for their vote for smoke-free East Baton Rouge or serving on the board, Coletta is there to help. Given her level of AHA “fame” and because I had not yet had the opportunity to talk with her, I was excited to have the chance to learn about her passion for passing heart-healthy policies.

My first question was about her name. You see, the “a” on the end of Coletta is silent. I have wondered about this silent “a” ever since the first time I saw her name on paper. Coletta Ann (double first name) Barrett is a fourth generation Coletta. At the age of 16, rebellious Coletta Ann decided she was going to drop the “a” from her name, as well as the Ann. As shocked as her friends and family were at the time, they all began calling her Coletta (silent “a”) and the name has remained.

With my curiosity itch scratched, we could move on to discussing Coletta’s reason for devoting hours of her time volunteering for the AHA. Like many, Coletta has a personal connection to heart disease. At the age of 12, her grandfather, and her hero, gifted her with a week of summer camp. While away at summer camp, her grandfather experienced a massive heart attack and died. This was a time of change for 12-year-old Coletta as she not only lost her grandfather but had her grandmother move in with her family. She believes that losing a man she loved dearly at such a young age, played a role in the decisions she would make about the direction of her life.

“Being able to give other grandchildren the gift of time with their grandparents.”

That is a motivator for Coletta and a reason why she became a cardiovascular nurse and a devoted American Heart Association volunteer.

Coletta and her husband Buddy have been married for 41 years and live in Baton Rouge. They have two daughters, Jessica and Lauren, and three grandkids, ages two, four and seven. All boys! Their family is close-knit and Coletta says car seats stay in Buddy’s car so he can pick up his grandsons to enjoy outings together.

Coletta has experienced her own challenges as she was diagnosed with cancer at the age of 42. Her friends and co-workers wondered if she would switch her fundraising and engagement to cancer, but she was steadfast in her devotion to ending heart disease.

“Cancer was a gift. It gave us a gift of time where we could decide how did we want to spend that time, what did we want to do with our focus, how we really want to be remembered. Whereas with sudden cardiac arrest, you’re here and gone and you don’t get to say goodbye to your loved ones. It’s those really difficult times of not being able to get closure that kept me feeling like I was right where I needed to be.”

She’s even gotten her family involved in her volunteer work. Her daughter Lauren, became an advocate for smoke-free policies because at the time, she was a bartender and was feeling the effects of breathing secondhand smoke. Her daughter had the opportunity to testify at the state legislature when the state of Louisiana was debating a statewide policy.

Coletta has been a part of the Capital Area Board of Directors. Each AHA board sets priorities they would like to focus on. They use community data and discuss the areas they feel will have a true impact on their community. A few years ago, the American Heart Association’s Capital Area Board of Directors decided they wanted to see a smoke-free policy passage as a reality. They put a plan in place. Through years of hard work, challenges and many ups and downs, East Baton Rouge celebrated a smoke-free policy passage on August 9.

In July, Coletta attended the American Heart Association’s You’re the Cure on the Hill in D.C. This is a day when You’re the Cure advocates from across the country come together to educate Congress on the AHA’s policy agenda. This year, as luck would have it, You’re the Cure on the Hill fell on the day of the vote on the American Health Care Act. While emotions ran high, Coletta loved the energy and the opportunity to discuss this highly charged vote. The AHA doesn’t bring volunteers to D.C. without preparing them for what to expect. The first day is spent training on how to talk with policy leaders and the policy priorities.

“I firmly believe that people who volunteer with this organization, and continue to volunteer, have so many opportunities for learning. The American Heart Association invests in what they call volunteer development. You know, they educate us, they give us tools and when there are educational programs they’ll send us off to learn more. I’ve often told people that my volunteer work has prepared me to do many of the things that I am able to do today. If you invest in the American Heart Association, they’ll invest in you.”

Well said, Coletta. We are forever grateful for our advocates like you. You’re the Cure.