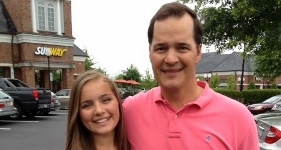 I didn’t remember anything from my week in the hospital, but when a friend brought in a copy of the six o’clock news from October 27, 2000 I quickly realized that either that was a slow news day, or that I was one lucky miracle survivor with an important story to share.

Reporter Steve Litz brought the story to a close saying: "Two important notes to add- It was difficult identifying Judd Rupp as he was not wearing any kind of I.D.  Everything worked in Rupp's favor at the YMCA because so many know CPR there.  Another note, Juddson Rupp is an employee here at WSOC-TV.  We all wish him well in his recovery."

After getting choked up watching news clips like the one above a decade ago, I knew that internally and externally my life had changed.  I could no longer be a just a private citizen.   I had to share my story publicly for several reasons.  I now strongly believe that being and advocate and sharing your story is an important duty as a survivor.

The American Heart Association approached me to ask if they could use my story for the upcoming Heart Ball.  The Marketing Director told me that sharing my story could help save hundreds, if not thousands of lives through the years.  Then the publicity became a 'no-brainer' for me.  Why wouldn't I help save others by informing people to learn CPR or by encouraging them to purchase AED's and stop cardiovascular disease with added research and funding?

After the initial Heart Ball work in 2001, I was asked to be in a Public Service Announcement (PSA) that ran on Charlotte TV stations and throughout the Carolinas in a commercial also featuring my wife and two children urging people to 'Learn CPR...it can save lives!'  I became the poster boy for the American Heart Association, as my wife had joked.  She also knew that I was honored to do this and practically anything to help AHA grow its cause...and be the cure.

My volunteer time and work became even more empowering after meeting Betsy Vetter in 2004.  She asked me to join You’re the Cure, and become an advocate for AHA.  My initial role had me traveling to Washington, DC and visiting with Federal Legislators on Capitol Hill.  I am proud to say that I have not missed an AHA Federal Lobby Day since.

Since then I have held multiple roles including communications/media chair for the NC AHA Advocacy Coordinating Committee, a member of the AHA Charlotte Mission Committee, and co-chair of the Smoke-free Mecklenburg Advocacy Committee. I have also been active with Emergency Cardiovascular Care and the Heart Ball, and attended numerous state lobby days at the General Assembly in Raleigh where I share my personal experience with state lawmakers to help them better understand the importance of supporting strong public health policies.

Speaking with countless legislators and their staff to put a face on heart disease, and fight for so many who are not with us anymore is the most empowering reason I do this.

*On December 14, 2013 Juddson was the recipient of the 2013 Dr. Robert Blackburn Award for Advocacy Excellence which honored all of his advocacy work at the American Heart Association.