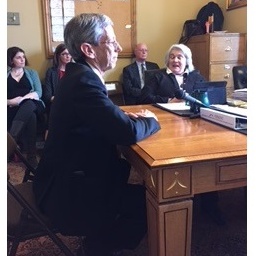 It’s always great to have a national expert in your backyard, and even better when they’re an advocate!

It’s always great to have a national expert in your backyard, and even better when they’re an advocate!

Dr. John Hughes is a Professor of Psychiatry and Psychological Science at the Vermont Center on Health and Behavior at UVM. He knows a thing or two about behavior and tobacco. He has been called upon for his expertise by the Obama Administration and he was the former chair of the Vermont Tobacco Evaluation and Review Board.

This month, he lent his expertise to our cause - -raising the sale age for tobacco to 21.

Dr. Hughes testified before the Senate Health and Welfare Committee. He reached out to try to educate the Senate President face to face on the issue and his opinion piece touting the benefits of such a policy and importance of a well-funded tobacco prevention program was published in VTDigger.

Please join us in thanking Dr. Hughes for his advocacy and take a minute to read his piece below, published on March 3rd. https://vtdigger.org/2017/03/03/john-hughes-raise-age-cigarette-purchase-21/

Raise the Age for Cigarette Purchase to 21

We have a good opportunity in this legislative session, to dramatically improve the health of Vermont young adults. Sens. Alison Clarkson, Carolyn Whitney Branagan, Ginny Lyons and Anthony Pollina have introduced a bill that would raise the legal sale age for cigarettes and other tobacco products from 18 to 21.

The statistics about adolescent smoking are sobering: 10,000 Vermont kids alive now and under the age of 18 will die prematurely from smoking. Almost all (95 percent) of adult cigarette smokers started before their 21st birthdays and four out of five of those who did so became daily smokers. The National Academy of Medicine concluded that raising the age to 21, either abruptly or gradually, would decrease youth tobacco use by 12 percent and tobacco-related deaths by 10 percent. So, if we can delay the availability of cigarettes to age 21 why wouldn’t we?

The 18-year-old purchase age was set decades ago. Since then, research has shown that kids under age 21 become addicted faster than adults and they have a harder time quitting. In addition, adolescents who begin smoking early on are much more likely to fall into addiction on heroin, cocaine and marijuana. Raising the age for alcohol purchase to 21 has not only reduced traffic accidents but also decreased rates of developing alcohol addiction in young adults and there is no reason to think the same will not be true for smoking.

Vermont lawmakers have it within their power to make a difference.

More than 200 towns and cities across the U.S. as well as the states of California and Hawaii have already raised the minimum sale age to 21. They have found few problems if enforcement focuses on retailers, not adolescents. In fact, 75 percent of adult smokers endorse raising the age to 21.

Raising the age is not a panacea. We need to keep up our current efforts to dissuade adolescents from smoking. The Vermont Tobacco Control Program has been successful. The rate of youth smoking has been cut over half, but still 25 percent of youth use tobacco. In recent years, only 10 percent of the monies obtained from the tobacco industry as compensation for the harm it has inflicted has been used for tobacco control, and the Legislature keeps cutting it even more. We absolutely must keep up our efforts either by funding the program from tobacco industry monies or, like many states, by dedicating a small percent of Vermont tobacco taxes to tobacco control.

If we can reduce rates, lives will be saved and thousands of families won’t see their loved ones go down a deadly path. Vermont lawmakers have it within their power to make a difference. Without a doubt, they should pass S.88. There is no downside and the benefits are compelling