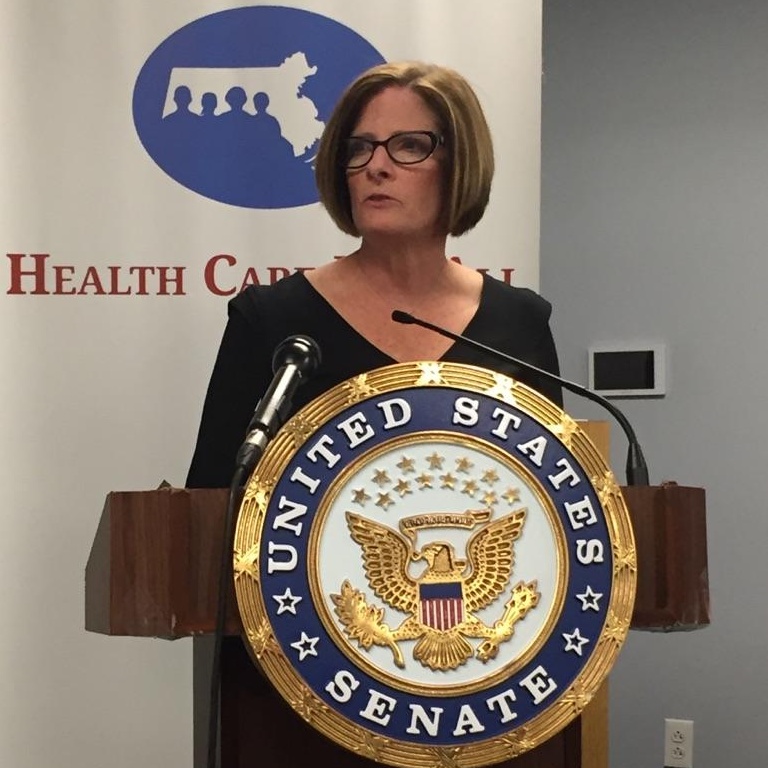 Diane Pickles is a vice president at M+R. She lives in Haverhill, Massachusetts with her husband Bill and sons Jake and Matt. Diane is a long time American Heart Association advocate and Chair of the Massachusetts Statewide Advocacy Committee. She recently shared her story about the effects of any changes to health care by Congress at a press conference with US Senator Ed Markey.

My name is Diane Pickles. I am a resident of Haverhill, Massachusetts and a long-time volunteer for the American Heart Association. My younger son, Jake, was prenatally diagnosed with a congenital heart defect called Hypoplastic Left Heart Syndrome in 1994. The doctors told us he had half a heart, that he would most likely not survive, and we were given a pamphlet for a clinic in Wichita, Kansas where – for one more week in the pregnancy – we could still seek an abortion.

Jake’s survival 22 years ago was nothing short of a miracle and he is among the oldest survivors for his heart defect. We are incredibly blessed, but it came with a tremendous amount of worry, sleepless nights, heartache, and gray hairs from three open heart surgeries -- at three days, six months, and two years; countless emergency room visits; many hospitalizations; chronic illness; and daily stress.

When Jake was four-years old, my husband and I found a way for me to return full time to work. This felt like our second miracle because it gave us a chance to try to make our way out of the medical debt we had incurred from tremendous out of pocket costs despite our private insurance. But, more importantly, it gave us the chance to enroll in a new insurance plan – one without a lifetime cap.  At that time, at the age of four, Jake was more than halfway to the $1 million lifetime cap we had on our current plan. One more surgery or ICU admission, which was always a looming possibility and he easily could have been over that cap. One major monkey was off our backs. We still worried about losing our child, but we didn’t have to worry about losing his insurance coverage.

Jake is now 22 years old. He has since been diagnosed with another condition – an immune deficiency. He will remain on our insurance for four more years.  At that point, he will need to move to his own insurance policy. Will he be insurable?  What if he can’t work for a period of time due to his heart condition and lapses coverage? If he has to pay a higher premium due to his pre-existing conditions, will he be able to afford it? And what about lifetime caps? The prognosis for Jake’s heart, although no one can tell us when it will occur, is likely heart failure and a transplant. The estimated cost for a heart transplant is $1 million – however, for single ventricle patients like Jake, the costs are higher -- some estimates as high as $4 to $6 million.  His immunotherapy infusions currently cost $20,000 a month. His last cardiac catheterization cost $35,000. His twice-annual routine visits to the cardiologist cost several thousand dollars.  Do the math and you’ll see how quickly my young son would be uninsured and forever uninsurable with a lifetime cap and pre-existing condition exclusions.

If you think Jake is an exception or unusual story, I assure you he is not.

To our members of Congress: If you have never known the pain of worrying that your child may not outlive you, I pray you never will. If you like me have come close to losing a child, you know that it is enough for you and that child to worry about their mortality without worrying about whether an insurance company will deem your precious child an acceptable and worthy risk.

It deeply saddens me that House of Representatives told us last week that Jake is not an acceptable or worthy risk, though I am profoundly grateful our delegates were not among them.

To the members of the Senate, I want to say this: So many people have prayed and hoped for Jake over the last 22 years, and I am eternally grateful. But today, hope and prayers are not enough. Don’t tell Jake and all those like him that this country miraculously saved his life through medical advances but will no longer provide the coverage he needs to continue his care. Reject any version of a health care law that would allow – in any form – a lifetime cap or a penalty for pre-existing conditions. His life and so many others literally depends on it. Today it is not enough to pray for my Jake. Today we must stand up and act.