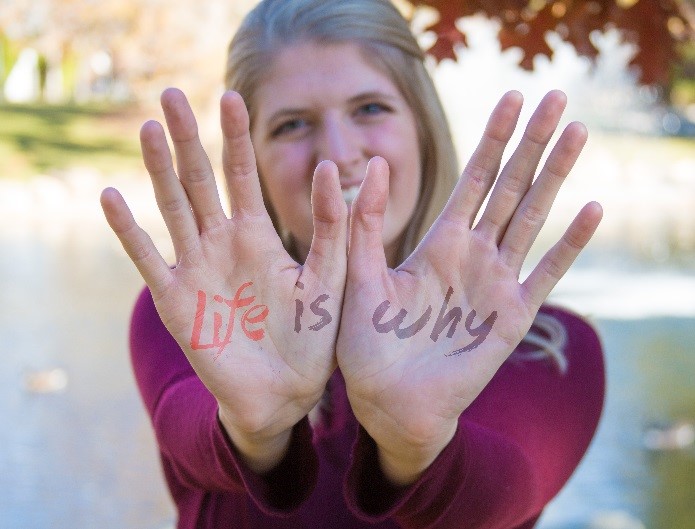 My name is Andrea Witte and I’m 20 years old and a junior at the University of Nevada, Reno studying biology on the pre-medical track. I was born in Anchorage, Alaska to two healthy wonderful parents Mary and John. Since birth, my parents and both my maternal and paternal Grandmother thought something wasn’t quite right. Both grandmothers commented on how I was “very tall and floppy.” At their urging, my parents took me from doctor to doctor, who all said “you have a very tall baby, but she is just fine.” That was until I was 18 months old when my Grandmother read an article on Marfan Syndrome while visiting Stanford Hospital and Clinics and sent the article to my parents. She urged us to ask the doctors to rule out Marfan Syndrome even though all the dominant features of Marfan fit. After a battery of tests in Anchorage in 1998, including an eye exam and an echocardiogram, I was diagnosed with Marfan Syndrome.

Marfan Syndrome is a rare genetic connective tissue disorder that affects the heart, eyes, lungs and skeletal system.  The heart defect is potentially the most fatal part of having Marfan. After learning more about my condition, my parents and Grandma immediately became as involved with helping people with Marfan as possible through fundraising, awareness and support for other parents of affected children. While my Mom and Grandma worked with the foundation, my Dad made it his priority to not let Marfan hold me back. Even with Marfan, my dad taught me that though there were many things I would have to learn to do differently, there were very few things I couldn’t do. I have traveled all over the world, learned how to downhill ski, snowmobile, fishing, and have learned to play multiple instruments. I was even able to join the competition rock climbing team at my University.

Throughout middle school and high school I focused on taking leadership opportunities, planning awareness events, providing support for other teens, as well as fundraising and organizing workshops and events for others with Marfan Syndrome. Through my involvement with the Marfan Syndrome community, I was able to travel to different schools to raise awareness of Marfan and provided online support to teens in other states. Now in college I helped create the Young Adult Council to help organize group events, and provide support and education for college age students living with Marfan.

Everything seemed to be going smoothly, and my heart had been stable for almost four years on an experimental drug, I was having a great time at college, doing well in classes and was excited for my second semester. Then, at the end of January 2015, less than five days before the beginning of the spring semester at Nevada, a battery of tests were conducted and showed unacceptable growth of my aortic valve. It was determined I would have to have surgery, and soon.

On February 25, 2015 I went in for my first open-heart surgery to repair my aorta. The surgery lasted over eleven and a half hours and was very successful! With every surgery there are some risks, and there was a less than a 5% chance that my heart would not be able to beat on its own after surgery. Sadly that happened to me and I had to stay in the ICU for 14 days, hoping my heart would bounce back. In order to keep my heart beating I was hooked up to an external pacemaker that kept me holding on by a couple of beats. Instead of waiting in the hospital for my heart to bounce back, I eventually decided to undergo another surgery to have a permanent pacemaker put in.

After 14 days in cardiac ICU, a collapsed lung, and 2 heart surgeries I was finally able to leave the hospital. The American Heart Association funded the research for the pacemaker and without it I would have died.

With my permanent pacemaker, I could leave the hospital and dance at my dad’s birthday party two days later! It has allowed me to be mobile during my recovery without getting extremely exhausted. Most importantly it has allowed me to continue my education at the University of Nevada and finish up my freshman year. I have now been able to return to downhill skiing, rock climbing, and school.

My new goals have been set on helping the American Heart Association and other health organizations in their mission to help everyone understand that heart disease is an epidemic, and a major public health issue. It doesn’t only affect the old but also the young. As the number one killer in America it takes more lives than all of cancers combined and I am committed to changing that and pushing forward research and progress to help others with heart disease and Marfan Syndrome live long, happy lives.

I want to thank the American Heart Association for everything they have done for children and young adults like myself growing up with heart defects and Marfan Syndrome. For greatly improving my quality of life, and for allowing me to continue my education and follow my dream of going to medical school. I am so excited for what the future holds for me, with this new chance I was given thanks to the American Heart Association for all their research conducted that has saved and improved the lives of thousands of people like me.