This December, we'd like to introduce you to one of our most dedicated advocates - Andra Casillas. Andra is a member of the Austin Grassroots Action Team and frequently volunteers at events in the Austin area. Here's her story in her own words.

I was born in the small East Texas town of Gilmer, but I was raised out in the country. I was the third oldest of seven children. Our lives revolved around church, hanging out at our grandfather's grocery store and going to school. Gilmer is the sweet potato capitol of the world. They celebrated the 80th year of the Yamboree in October with the Crabtree Carnival rides, dances, yam pie contests, fiddler contests, parades and even a pageant. My best childhood memories are of the fun we had during the four-day Yamboree each year and Rural Youth Day at the State Fair of Texas in Dallas. 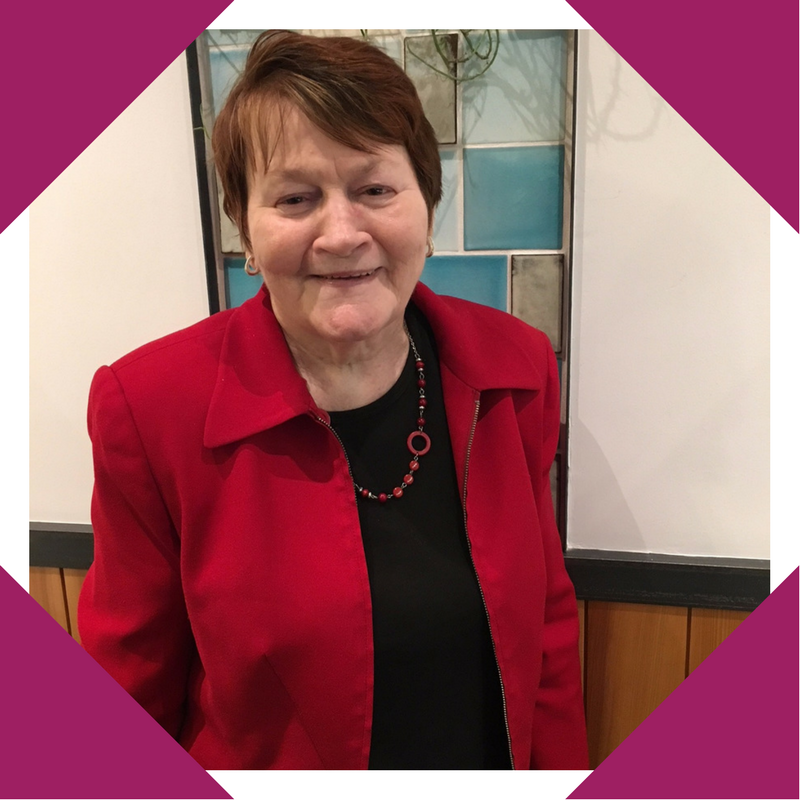 When I was ten, I had strep throat which turned into Rheumatic Fever. After I was well enough to go back to school, I realized I could no longer run because it had affected my heart.

Our Mother passed away when I was fifteen. It was the most devastating day of my life! Our grandmother, Annie, stepped in and raised us. Our Dad died in 1977 at age 65 of a heart attack while mowing the yard.

During the 1984 Republican Convention in Dallas, I was a driver for the White House Staff going to different meetings and caucuses. The most colorful person I drove was Senator Dole who needed to go from the Anatole Hotel to the Hyatt Hotel for a meeting. I waited for him, and when he came out, he asked if it was okay for him to sit in the front seat. I said of course. He said he had a driver in Washington and always had to sit in the back. I was driving a Lincoln which had a lot of buttons. He was intrigued with them and pushed a few. When I got back to the Anatole, I stepped out of the car, walked around to open his door and he went into the hotel. When I got back to the driver's side, the door would not open and the car was still running! In about five minutes I was swarmed by Secret Service agents. Vice President Bush was scheduled to arrive at that same door within an hour. The Agents tried everything to get the door open, and finally called the owner of the Lincoln dealership to come. It was a Sunday morning, I was a nervous wreck but the car was moved in time for Vice President Bush to make his entrance.

In 1986, I was working part time for Delta Airlines in Reservations Sales. I was on the phone with a customer when I got a severe headache, the left side of my face started feeling numb, my words became slurred when I tried to stand, and I could not feel my left foot touching the floor. My boys took me to a hospital where I was diagnosed with having had a mild stroke and kept me there for a week. My feelings came back in about four days. It took about a year of taking medications to get completely back to normal.

In 1992, my older brother James died of a massive heart attack at the age of 49, leaving a wife and three small children.

In 1993, I was at a restaurant in Addison when I met a handsome and charming man who turned out to be the father of Dallas Cowboys starting Defensive tackle, Tony Casillas. We dated for a year and were married for four years. We went to all the football games and events associated with the Cowboys. Tony was honored with the Roberta Climete Award because of his work with the youth of Dallas by the National LULAC organization. My husband Pete and I were asked to stand at the convention in Dallas as his parents. What an honor! Pete has now passed away. I remain friends with Pete's children and keep up with them on Facebook. 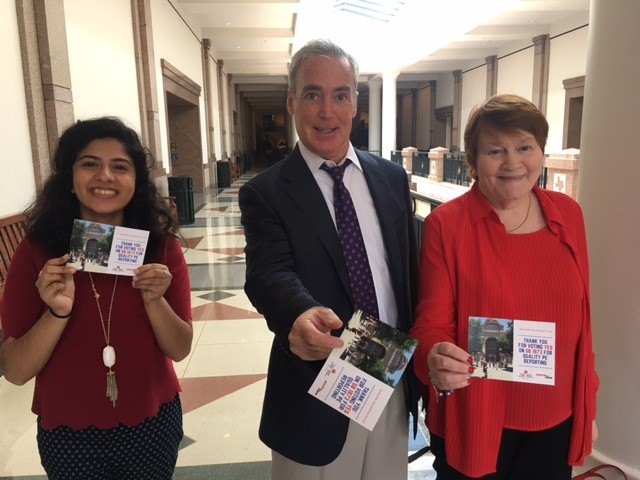 Andra joins advocates Myra and John at the Texas Capitol to drop off thank you notes to the lawmakers who voted for a physical education bill earlier this year.

In early 1996, I started having congestive heart failure, palpitations, shortness of breath and after 61 trips(!) to the Baylor ER and a few wild rides in ambulances, the doctors said it was time to replace my mitral valve. In 1997, I had open heart surgery to replace the valve. But six months later, I started getting really sick. I was admitted to Baylor Garland Hospital where I was diagnosed with Endocarditis, a serious infection around the artificial mitral valve, and Ovarian Cancer 3C. Since they were not equipped to handle my case, they sent me to the main Baylor Hospital where it was touch and go for awhile. Many doctors worked together to save my life. They found that I had been given the wrong type blood during my previous heart surgery which complicated my care. After 60 days, I was able to go home and continue my chemo treatments.

In 2012, my niece Dina had a massive brain stem stroke that left her in a coma for three weeks in a Plano Hospital. The day she passed, my oldest brother Barney had a mild stroke and was hospitalized in the same hospital!

Over the last 20 years, I have been diagnosed with several heart-related issues including Atrial Fibrillation and Tachycardia. In 2000 I was diagnosed with Cardiomyopathy which the doctors thought was caused by the Chemo. I met with surgeons about a heart transplant, but a miracle happened and my heart healed itself of the Cardiomyopathy!

Just last year, I had my third pacemaker implanted and I feel great now! I have to go to the Cardiologist often to make sure I'm OK.

I have two boys that I raised on my own since they were six months and five. Robert is 50 and Richard is 45. I also have one grandchild, Alexis, who will be fifteen next month. She is the joy of my life!

I am a retired manager from Southwestern Bell and am a Lifetime Telephone Pioneer. I go to a luncheon each month to meet with other retirees. Our group adopted T A Brown Elementary in North Austin. We treat the students to celebration pizza parties for perfect attendance, etc. They always seem so thrilled to get new book bags, books, games and healthy snacks.

I spend my mornings on four Facebook groups encouraging ladies who are going through Ovarian Cancer. I talked to a lady in India yesterday who's mother is going through the same cancer diagnosis as I went through. We discussed diet, activities and treatments. In my spare time, I am writing a history book of pictures and stories of the community I grew up in East Texas. I plan to have it available for an event next April. I also help my daughter-in-law, Erika prepare florals for weddings when she needs me. 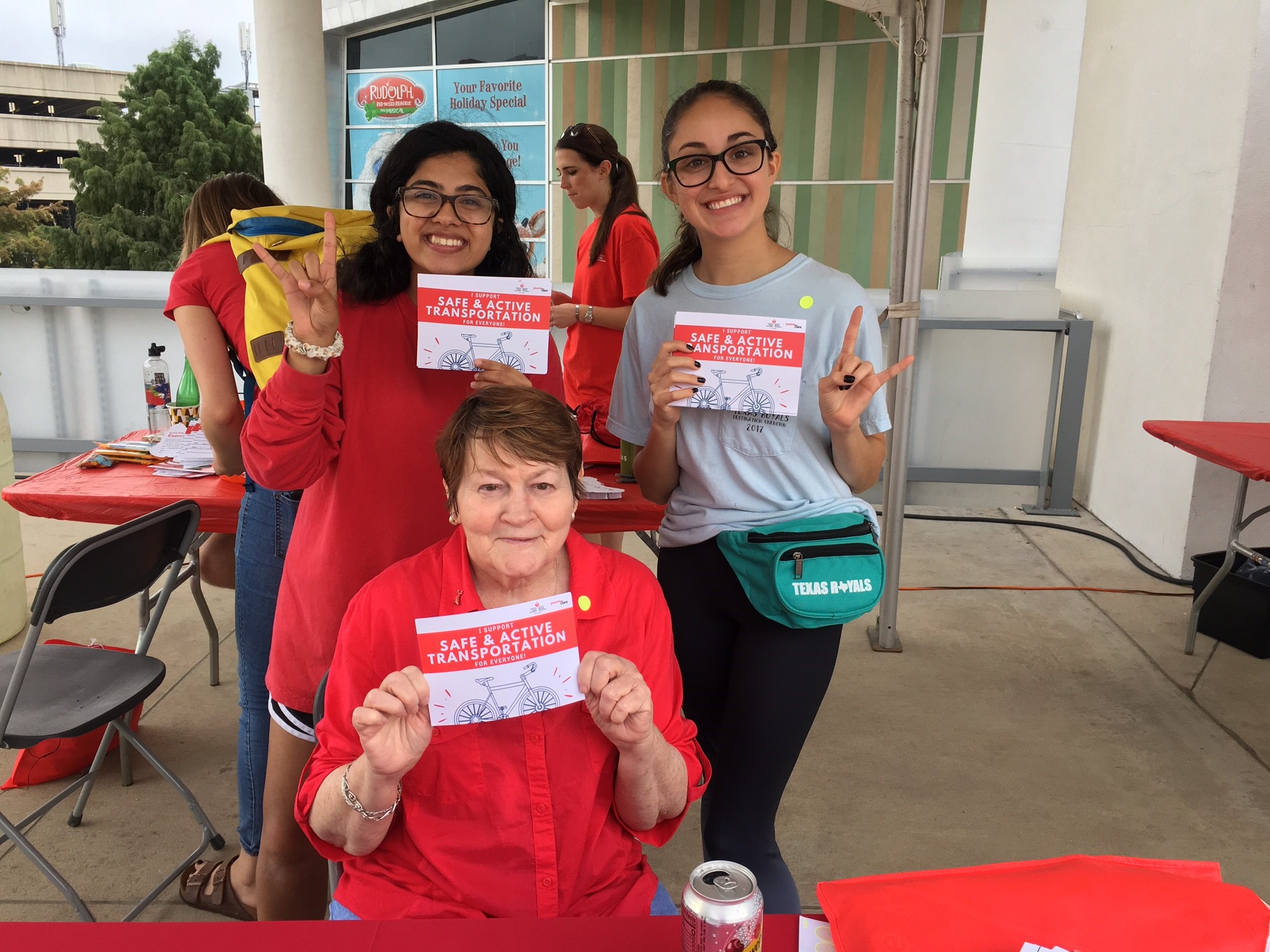 Andra and two other volunteers helped collect cards in support of the Travis County transportation bond this fall.

I advocate because of my family, and because of my own struggles with heart disease. I enjoy meeting with Senators and Representatives at the capitol. I feel my story may help them to remember why it is important to pass our bills. I want to help others avoid going through what my family has gone through!

If you would like to tell your story of survival or involvement to be featured in an upcoming newsletter or blog post, please email [email protected]