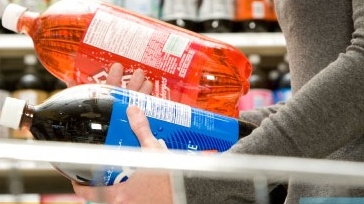 Please see our press release below:

The organizations are advocating for Rhode Island policymakers to enact the tax on sugary drinks during the 2017 Legislative Session. Revenue from the tax, estimated at upwards of $27 million per year, would be dedicated to a new Children’s Health Promotion Fund that would invest in outdoor recreation, effective physical education in schools, access to healthy foods, health equity initiatives, and other evidence-based programs aimed at improving the health of Rhode Island’s children. Legislative proposals have been introduced in the Senate by Senator Donna Nesselbush (D-District 15- Pawtucket, North Providence) and in the House by Representative Shelby Maldonado (D-District 56-Central Falls).

“Sugary beverages now account for ½ of added sugar intake, and are linked to rising rates of diabetes, coronary heart disease, obesity and other preventable illnesses that affect far too many Rhode Islanders,” said Karen Aspry, MD, MS, a cardiologist and president of the American Heart Association’s Rhode Island Board of Directors. “These diseases are key drivers of high health care costs in our state. Rhode Islanders already spend more than $550 million on obesity-related medical costs – more than half of these expenditures are incurred by the Medicare and Medicaid programs. Unfortunately, education alone is not enough to correct the market forces driving sugary drink consumption. Many locales in the U.S. as well as Mexico and several European countries have enacted an excise tax on sugary drinks. Early evaluations from Berkeley, CA, and Mexico show encouraging results - the tax motivated people to drink fewer sugary drinks and more water. Funds raised should be used for programs aimed at improving the health of our communities though exercise and physical activity, healthy food access, and other pressing needs.”

“I am excited to explore this promising new strategy for building a healthier Ocean State,” said Senator Donna Nesselbush. “The burden and skyrocketing costs associated with chronic disease are borne by individuals, taxpayers, employers and the state. No stone should be left unturned in our efforts to improve the health of Rhode Island children, families and residents. This proposal could help shape a healthier future by driving down sugary drink consumption and investing in our communities.”

According to the State of Obesity Report, a project of the Trust for America’s Health and the Robert Wood Johnson Foundation, Rhode Island’s adult obesity rate is currently 26 percent, up from 16.9 percent in 2000 and from 10.1 percent in 1990. If these trends continue, the report projects significant increases in diabetes, hypertension, heart disease and some cancers in the Ocean State by 2030.

“These diseases affect Rhode Islanders at all income levels, but low-income Rhode Islanders are especially vulnerable because they have less access to healthy nutrition and fewer opportunities for physical activity in their neighborhoods,” said Rep. Shelby Maldonado. “We can help fix that problem by using new revenue to invest in safe places to play and be active, and food access programs that allow low-income Rhode Islanders greater purchasing power at farmers’ markets and stores where fresh fruits and vegetables are sold,” Rep. Maldonado said.

“One fifth of all cancer cases are caused by excess weight, poor diet, physical inactivity, and over consumption of alcohol. Excess body weight increases the risk for 13 cancers,” said Susan Roberts, Rhode Island government relations director with the American Cancer Society Cancer Action Network (ACS CAN). “Rhode Island lawmakers have an opportunity to contribute to the growing body of evidence suggesting a positive public health impact from sugary drink taxes.”

“As a practicing physician for more than 22 years, I have seen first-hand the marked increase in diet-related diseases among Rhode Islanders,” said Sarah J. Fessler, MD, president of the Rhode Island Medical Society’s Board of Directors. “Food is essential to life, but sugary drinks are not. Sugar-loaded drinks contribute virtually no nutrition to the diet and increase the risk of many chronic diseases including heart disease, diabetes, and some cancers. A tax on sugary drinks is a tool to guide people to choose healthier options. It would go a long way toward making up for the cost of treating obesity-related complications in Rhode Island.”

Oral health care is also negatively affected by the rates of sugary drink consumption. “In dentistry, an ounce of prevention is worth a pound of cure,” said Dr. Bryan Beagan, president of the Rhode Island Dental Association. “The tooth decay caused by sugary drinks puts a strain on your smile and your budget. Once teeth are damaged, they can only be repaired by a dentist. But we can reduce tooth decay and other oral diseases by educating the public on the public health risks associated with sugary drinks and this proposal is a good first step in curbing consumption.”

“Sugary drinks are the single largest source of added sugars in the American diet. The American Heart Association recommends that children over the age of 2 have no more than one 8-ounce sugary drink a week—yet children today are consuming as much as ten times that amount! It’s no wonder that so many children in our state are struggling with health problems previously not seen until adulthood,” said Laurie Stephenson, congenital heart disease survivor, mom and fitness instructor. “I want my kids to live long, healthy lives. Increasing the price of sugary drinks would make unhealthy drinks more expensive for kids while funding programs in Rhode Island communities to help kids be more active.”

“There is sufficient scientific evidence that sugary drinks are unique contributors to type 2 diabetes and heart disease; and there is sufficient scientific evidence that reducing sugary drink consumption will have a significant impact on health and the prevalence of diseases such as type 2 diabetes and other metabolic diseases,” said Megan Tucker, senior director of government relations for the American Heart Association. “We hope the General Assembly will act quickly to protect the health of Rhode Islanders and ensure a healthy future for our children.”

The sugary drinks tax and Children’s Health Promotion Fund proposal is supported by: