In honor of stroke awareness, the City of Austin has proclaimed October 29th, 2015 as World Stroke Day. On October 14th Austin Mayor Pro Tem, Kathie Tovo, presented the World Stroke Day proclamation to Chris Figureida, the cyclist behind Cycle for Heart. Chris has traveled thousands of miles around the world on his bike to raise awareness for the American Heart Association. His athleticism has helped to educate children, from across the country, on how a healthy and active lifestyle can prevent heart disease and stroke. Chris was joined by a handful of volunteers from the AHA’s Austin Grassroots Action Team.

‘F’ stands for facial drooping, ‘A’ is for arm weakness, ‘S’ is for speech difficulty and ‘T’ stands for time to call 9-1-1! Seton’s Stroke Institute has expanded their program to include designated stroke treatment floors at Seton Medical Center Austin and UMC Brackenridge, it has enhanced clinical and research divisions, and will soon conduct clinical trials to study newer treatments for acute stroke and stroke prevention.

At the October 27th Fort Worth City Council meeting, Mayor Betsy Price presented the World Stroke Day 2015 proclamation to AHA/ASA volunteers and staff on behalf of the entire Council, thereby proclaiming October 29th, 2015, as World Stroke Day in Fort Worth.

Before reading the proclamation, Mayor Price stepped off the dais to greet the members of the AHA/ASA group. She commented that a few months ago the Council addressed heart disease, and now was the time to address stroke. In trying to create healthy communities, she is committed to reducing the incidence of stroke. Mayor Price related a story of a friend who had a stroke just four weeks ago at age 51, and fortunately received help in time because he was on the phone with a friend who knew the symptoms of stroke. The Mayor encouraged everyone to know the symptoms of TIA and stroke. She then read the proclamation and presented it to volunteer Nancy Healey.

Nancy, a stroke survivor from Fort Worth, accepted the proclamation and spoke for a few minutes about her experience with stroke and her passion for making a difference. Her stroke was due to secondhand smoke exposure, so she commented on her desire to help make Fort Worth smoke free. Nancy expressed her gratitude to Mayor Price and the City Council for their recognition of World Stroke Day, and then the whole group posed with Mayor Price for a photo. 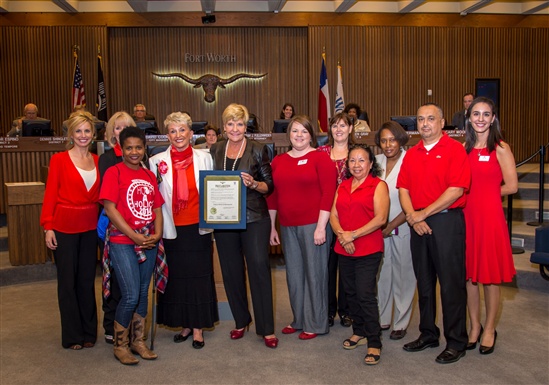