This month, we are featuring a guest blog written by Kristine Brockhagen, a State Advocacy Committee member in Texas who has been volunteering with the American Heart Association since 1981! Here's her story in her own words:

When I was just 18 years old, my mother announced that she had signed up both me and my twin sister to learn CPR. She said it was an important skill to learn and it could possibly save someone someday. As I grew up, I continued to keep my CPR certification current each year. Little did I know that when I was 41 years old, I would use it on the love of my life.

Normally, I went to bed much earlier than my husband, but one night I stayed up a little later than usual. Close to midnight my entire body began to sweat and I had an overwhelming feeling that my husband needed me. I raced to our bedroom to discover that he was not breathing and I could find no pulse. I began CPR and then yelled for my daughter to call 911. The  ambulance drivers arrived quickly, but a short time later my husband, Chuck, was pronounced dead at the age of 43. A few weeks later his autopsy revealed that he had a grossly enlarged heart, the size of a cow’s heart! He could not have been saved that night using only CPR — and if he had survived through other medical intervention would have needed a heart transplant.

When someone you love dies, you are left with many unanswered questions. One important “what if” question I did not need to answer was, “What if I had known CPR?” I had done everything in my power to save my husband’s life that evening, and I grateful that I did not feel helpless. My CPR training kicked in immediately. I am so grateful I knew CPR, even though it did not bring my husband back. I believe learning CPR is a gift you give yourself, in case you need to use it. In many cases, CPR does save a life.

I have been a volunteer with the American Heart Association (AHA) since 1981, serving on various boards and an advocacy committee. I currently serve as the state Jump Rope For Heart (JRFH) and Hoops For Heart (HFH) Coordinator for Texas. Most importantly, I have led school JRFH events for 37 years. 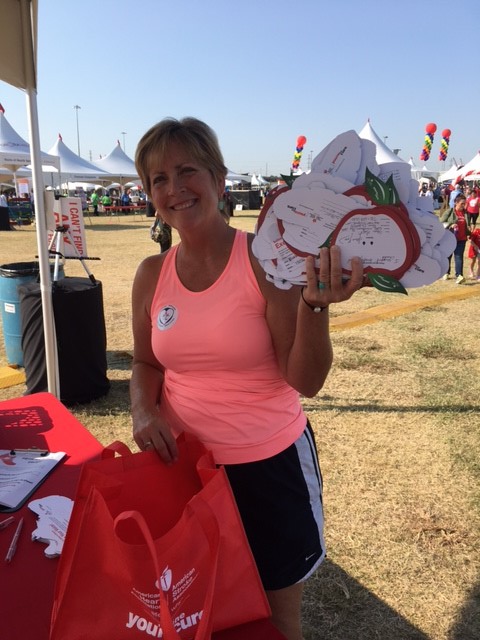 Kris set a new record for collecting support cards at the Dallas Heart Walk in 2017!

I’ve always felt it was important for my students to know that they could help someone in an emergency and not feel helpless. I wanted them to know what to do and how to recognize if someone was having a heart attack or stroke. For this reason, I helped develop an educational “Kids Can Make a Difference” kit that accompanied all JRFH/HFH coordinator packets.

The year my husband passed away, I told AHA that I felt empowered by knowing CPR and I felt it was important for my students to know that they could also help someone in an emergency.

A few years later, I had two students who made a difference.

CeCe, a second-grader, was at home with her great aunt when she noticed her aunt was short of breath and rubbing her left arm. CeCe knew she had to act promptly. She called 911 and told the dispatcher that her aunt was displaying symptoms of a heart attack. CeCe saved her aunt’s life that day!

Another one of my students saved her father’s life one evening by performing CPR. She told me that she decided to come home early that night and discovered her frantic mother. Her mother was hovering over her husband helplessly. “I don’t know how to help him,” she said. Allison told her mother to move over since she knew what to do. She then told her mother to go call 911. That night Allison was a hero!

Being an AHA volunteer all these years has been so rewarding! JRFH/HFH are wonderful programs that provide lifesaving information to students and help fund vital cardiovascular research.

In the state of Texas, CPR training is a high school graduation requirement in all public schools. Training can take place between grades 7-12, must be hands-on with a mannequin, and must use a training curriculum from a nationally recognized organization such as AHA. All public schools in Texas must also have an automated external defibrillator (AED) on their campus. I encourage you to contact your local AHA affiliate for information on CPR training availability in your area.