After a medical journey that culminated with two surgeries for a rare heart condition & two strokes, you might say I have a new outlook on life.

Growing up in a small town in Delaware, I had no hint that I had been born with a hidden abnormality in my heart. I was a competitive Cheerleader as a teenager, and remained physically active as an adult. A husband and two small children kept me plenty busy. I was also a respiratory therapist at a local hospital, and still made time to jog several times a week.

I’ve always tried to have a positive attitude. I just didn't want to worry my family and friends when I started to have occasional dizzy spells or trouble catching my breath. After all, as a health care professional I saw sick people every day and I’d know if I was really sick. I kept my symptoms to myself.  When you see so many people who are worse than you, your situation seems minimal.  Eventually I had to admit there was something wrong.

In August 2008, I finally went to a doctor for help. The physician I saw chalked up my exhaustion to anxiety—typical, he said, for a working mother with young children. I didn't believe him, but in a way hoped  he was right. Unfortunately, my symptoms continued to get worse.

Over a period of months my condition deteriorated, but it was a nurse at my hospital watching me struggle to do my job who finally insisted that I see a local cardiologist. I was ecstatic to find a doctor who finally believed there was something physically wrong, even if he wasn't sure what was causing the problem.

It is so important to find a doctor who listens and understands. I was admitted into the hospital and ordered several days of extensive testing. After that, my local cardiologist recommended I see a team of experts at Johns Hopkins Hospital. That's where I learned there was a hole between the upper chambers of my heart, keeping more and more blood from traveling through my lungs, starving me of oxygen.

My condition was very rare. "A very sneaky problem." The hole in my heart was disguised by a flap of skin and my problems were more severe when I was upright; many of my earlier tests had been conducted while I was lying down. It was clear that I would need surgery. I could have open heart surgery to repair my heart, or I could try a less invasive procedure, which would robotically maneuver a fabric-like patch called a cardio seal device over my hole. I opted for the patch. It didn't work, but that wasn't clear for months. For six months, I continued to suffer, thinking mistakenly that tissue growth around the patch would eventually make me feel better. What should have been a period of recuperation was, instead, filled with more frightening symptoms.

I suffered several TIAs, or mini-strokes, one that left me blind for several minutes. It was time to face the prospect of open heart surgery. It was a risky procedure for someone whose heart had already been through so much. The key is to overcome fear; I drew on my faith in God and the support of family and friends.

In April 2009, I was back in an operating room at John Hopkins. It was a six-hour procedure and my heart was bypassed for more than 40 minutes. Everyone believed once I had survived that, the worst was over. They were wrong. Doctors still don't know why, just hours after surgery, I began to bleed internally. I was slipping away. But despite the medical chaos around me, I knew I would survive. I was rushed back to the operating room for my second open-heart surgery in less than 24 hours. Finally, my condition was stabilized.

It was now the beginning of my new life. There are plenty of lessons to learn from this tale: don't suffer in silence, listen to your gut, and get a second opinion.

I continued to dramatically improve and began having monthly adventures and living life to the fullest. In the year after my open heart surgery, I did more than I had ever done in my previous 33 years. Flying airplanes, competing in mud runs, and showing my children that, despite the odds, anything is possible.I found life to be so full and used my circumstance to see it differently. I was “high on life” as some would say. Unfortunately, in February 2011, another hiccup came my way.

I had not been feeling well for a few days. But, as a heart disease survivor that is not uncommon. I decided to take a warm bath to ease my aches and pains. I soon started to experience left sided weakness and slight confusion. Even as a medical provider and someone at high risk, I couldn’t face the fact that I was having a stroke. In fact, a hemorrhagic stroke. Followed by another a month after. I was rushed to a nearby certified stroke center by my husband. The fact that the hospital immediately recognized my symptoms at the registration desk amazes me.  Time is crucial in my circumstance. The staff stated that the AHA developed guidelines and education are what saved my life.

My strokes left me with mobility complications that took almost a year to overcome and mental complications that will continue to affect me, possibly for the rest of my life. I was sent to the National Rehab Institute in Washington D.C. It was there that I saw so many others even younger than myself dealing with circumstances that I couldn’t imagine. It was there that I saw first hand how technology could make a huge impact on a patient. Was I scared through all that? Yes, most definitely! I still have fears of reoccurrences from time to time or that feeling of the calm before the storm.

We had so many ups and downs… but what takes over the FEAR is HOPE. The willingness to show my children no matter what the odds or the cards dealt, I can do this. I won’t stop fighting!! I am a face of heart disease. Maybe I didn’t ask for this, but I tell you I won’t let heart disease control me. I will make it a part--a good part--of me! It has become a love, a passion in my life. I will fight for awareness and in the meantime I will be as strong as I can be. Each bump or new journey will only make me fight that much harder.

I am not going to let this derail my plans for my life. I am also using my new gift of life to help others. I have become actively involved in charity fundraisers and am determined to make a difference. I have such a great sense of fulfillment. I know my kids see me as happy and strong. That’s what is most important to me. 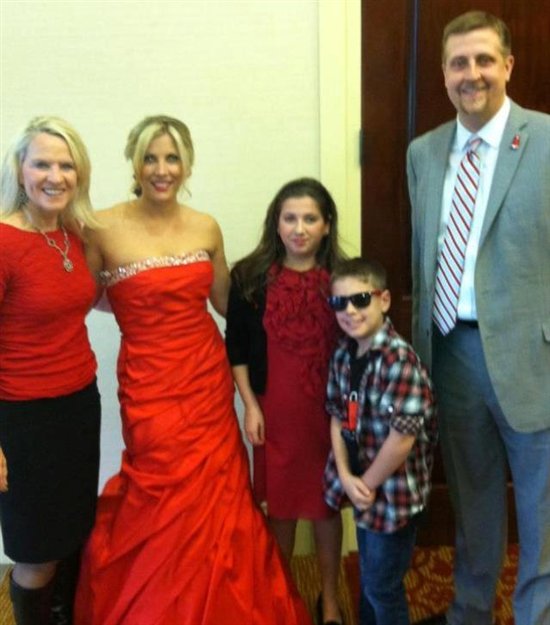 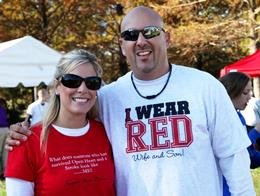