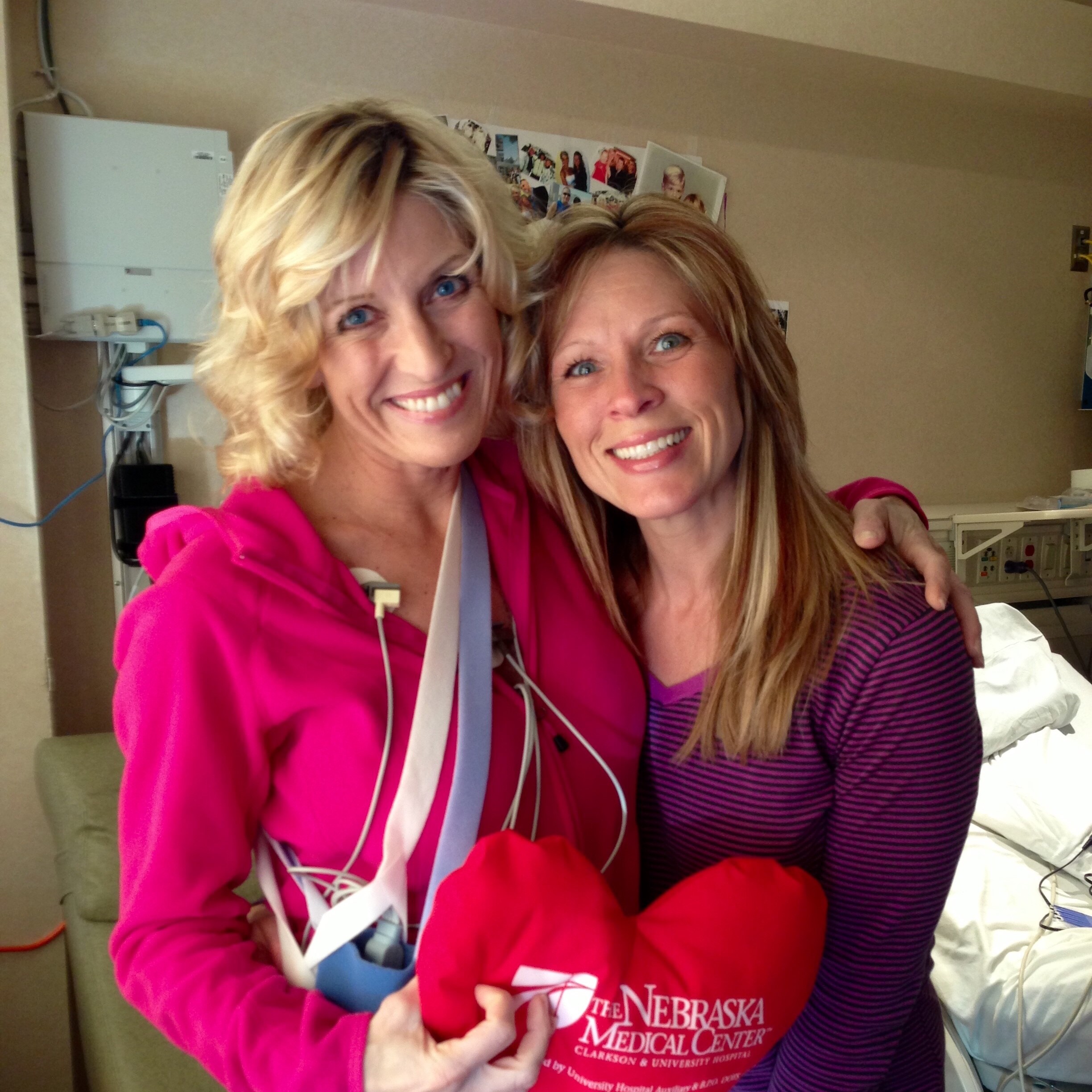 My wonderful husband, Jon and I together have 4 great children—Alexis, now 21; Garrett, 19; Josh, 15 and Justin 12.  Our daughter is working and planning for more school.   All 3 boys are currently playing football, and we are going to be cheering at lots of games this Fall!  We have a busy family life and feel enormously blessed. But on December 7th, 2012, my life changed.

In addition to being a wife and mother, I work full time as a Sales Director and I have instructed group fitness classes for over 25 years.  I’ve run 8 marathons.  I feel like I’ve taken great care of my health through the years, though I admit to embracing chocolate as the 5th food group :)

That morning, I woke up feeling awful.  I thought I had the flu, but soon I had a feeling of thunder and lightening going through my chest, and I was fighting to breathe.  My husband followed me into the bathroom where I had sank down on the floor and perhaps would have stayed.  Thankfully, my husband had cancelled a hunting trip at the last moment…the first of several divine moments to come.  Jon drove in the ditch around morning rush hour traffic in order to get me to Lakeside hospital.

Shortly after arriving at the hospital, my vitals proved something was terribly wrong.  My husband told me that before he knew it several doctors were caring for me, trying to determine the problem. After some time I coded twice, once for approximately 15 minutes before being revived with CPR.  I had gone into cardiac arrest, and at that point I had about 5% heart life, and was not expected to live.  My family was allowed to see me to say their good bye's before I was life flighted to Nebraska Medicine, in an effort to get me to higher care.  My daughter, Alexis, upon leaving the room, told my Mom not to worry because an angel told her I would be all right.  I was not expected to make the flight, but by the grace of God, I did.

As soon as I arrived at UNMC, I was hooked up to ECMO (ExtraCorporeal Membrane Oxygenation) and to another machine for kidney dialysis.  ECMO takes the place of the heart and lungs while they hopefully can recuperate, or as the bridge to a heart transplant or implementation of a device that helps the heart function.  My family was told that I could be on the ECMO machine for 2-3 weeks.  Throughout the week, the doctors searched for heart viruses, believing that was the problem.   They were evaluating for a potential heart transplant.  My organs failed, and I had at least one stroke.

On Dec. 12th, 2012, ( yes 12-12-12!!!) my heart came back fully functional.  A ct scan of my heart and several bouts with very high blood pressure led the Doctors to see a tumor on my adrenal gland.  The tumor was feeding on the adrenal gland, basically spiking my adrenaline to 500 times the normal level a person should have, which is what threw me into cardiac arrest.  Pheochromocytoma was the medical diagnosis, which is a rare tumor of the adrenal gland.

I woke up on December 14th, and was quite overwhelmed to hear of the events that had transpired the previous week.  I started out as an invalid, with broken ribs and a cracked sternum from the CPR.  But I was alive and right away I knew that was a miracle.  I remember my first thought was being so thankful that I was alive to go to my daughter’s upcoming graduation.

I had pneumonia, and a blood infection.  I had another instance of blood pressure in the 270 range while awake and nearly coded again.  Each day presented challenges, but each day had a victory as well. Each day I chose to focus on the good things, rather than the negative.

The pilots who had flown me to higher care, came to see my husband and me at NE Medicine.  They told us that they always followed up on patient flights, and had been watching for my name in the obituaries.  After they were not seeing my name there, they came to find out that I had survived and were elated to see us and tell us thank you for making their Christmas.  I told them the thank you, as I would not be here without them!

As I focused on the victories, each day got better and better.  One step turned into 5, then 10.  I regained use of my hands.  My progress surpassed the doctor's expectations.  They had told us to expect to be in the hospital at least a month.  My husband and I returned home on December 28th, 3 weeks to the day after everything had occurred.  I wore a defibrillator vest for a few months and went through cardiac rehab until I became strong enough to have surgery to have the tumor removed.  Thankfully, the tumor was benign.

I am back to my active life…. Wife, Mother, Christian, working in sales, instructing a couple of fitness classes a week, running, and cheering at lots of football and basketball games!  I have also had the privilege of being able to help out wonderful organizations like the American Heart Association.

I am forever grateful to my husband for first saving my life and for getting me to the hospital on Dec. 7th.  I am so thankful for my large medical team of Doctors, for my family, our Church, and for friends who helped support us with prayers, meals, and so much more.

I am a blessed and grateful woman and I just want to express my abundant thanks!  My advice to pass on ... Your body is the first place that you live.  Honor it by taking care of YOU, because you can make a better difference by being healthy.   Be aware of the warning signs for heart attack and stroke.  Heart disease is the #1 killer of men and women.  The doctors told me that because my good state of health was a large reason I was able to survive such a traumatic health event….that and a miracle.  Live each day fabulously and embrace it for the beautiful gift that it is!